The Cape of Good Hope is where nature provides its greatest tourist attractions. You should give yourself time to observe the behavior of the baboons, see the world from the Table Mountain, and relax while gazing out over the ocean. And if you are already on the Cape of Good Hope, it is worth going to the coast from False Bay to see one of the most beautiful beaches in the world. The time spent there will be interesting for children as well.

The Cape of Good Hope is located in South Africa, at the tip of the Cape Peninsula, about 70 km from Cape Town (depending on the route chosen).

The Cape of Good Hope was opened in 1588 by Bartolomeu Diaz. King John II sent the Portuguese on a journey. He entrusted them with a mission to explore what is located in the very south of the African continent. Diaz named the recently discovered piece of land the Cape of Storms – hundreds of years later, scientists confirmed his association: this interesting place attracts lightning. But John II wanted a more optimistic name. He decided that since we managed to get there, it gives hope to get to India as well.

Diaz did not participate in Vasco da Gama’s expedition, which achieved this goal. But he helped him get ready, even drove part of the route. Soon after that, he went to India himself, but could not get there – he died during a storm near the Cape of Good Hope.

To South Africa, and therefore to the Cape of Good Hope, it is best to go from September to December, when there is a warm spring on the continent, or from March to May, inclusive, when autumn comes there. Heat – over 30 ° C – starts in December and lasts until March. In Cape Town, which is about 70 km from the Cape of Good Hope, in June, July and August temperatures are lower – 12 ° C, and higher – around 18 ° C. It will be even cooler at the Cape itself. It is windy here, the air can be cold, even harsh. The location of the Cape of Good Hope means that the weather here likes to change quickly.

But this does not mean that you should not go to South Africa and the Cape of Good Hope in winter. During this period, there are fewer tourists, and prices for air tickets, accommodation and tourist attractions on the territory may be lower. This is also worth considering when making a decision.

The best way to get to the Cape of Good Hope is to rent a car or buy an excursion, thanks to which a comfortable bus will take you to the Cape.

Nature is the biggest attraction here

The Cape of Good Hope is the extreme part of the Cape Peninsula and belongs to a wildlife sanctuary. Its surroundings are home to many species of animals: many birds, as well as beautiful antelopes and demanding baboons. 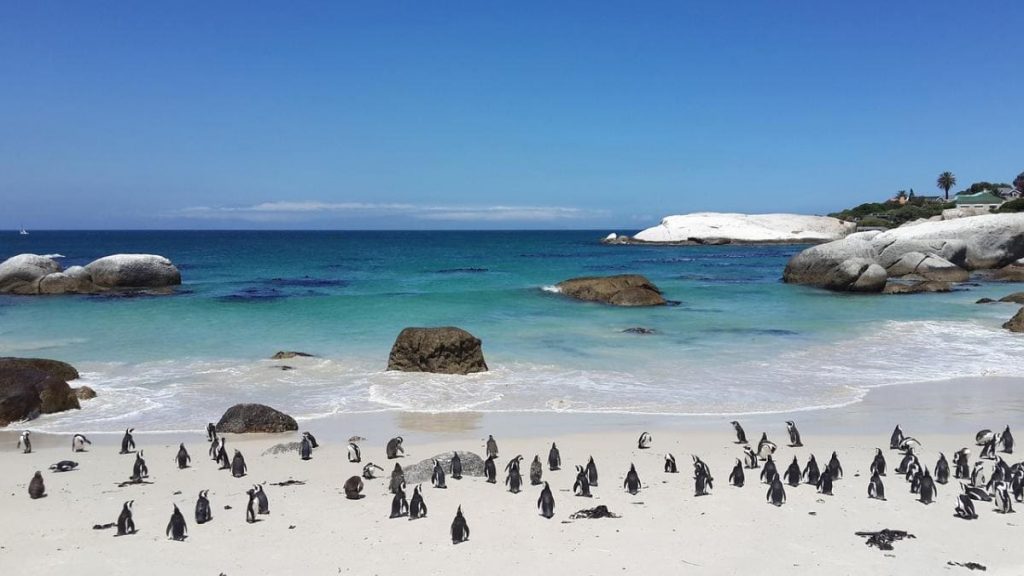 There are several routes for tourists on the Cape of Good Hope – they are planned so that people can fully appreciate the attractiveness of this place. Walking along the paths, you can see sheer cliffs from different sides and even see the consequences of shipwrecks.

Being on the Cape of Good Hope, it is worth looking at the world from Table Mountain (1086 m above sea level). The attraction is the opportunity to get to it by cable car, but you can also go upstairs by choosing one of the hiking routes. To protect the natural environment of this place, a National Park was created.

There is a lighthouse on Cape Point, or rather two. The first functioned until 1919. But it is often covered by clouds. Therefore, a second lighthouse was built, a few hundred meters from the first. The range of its light is about 100 km. The old lighthouse is now used as a surveillance center for all similar objects in South Africa. You can get to it by cable car or on foot. Anyway – this place is worth seeing.
Being on the Cape of Good Hope, you just need to visit the penguins – one of the main attractions. Their colony can be seen at Boulders Beach. It is one of the most beautiful beaches in the world, although as the name suggests (Glazuwa Beach), it is not quite your typical sunbathing spot. Penguins here step on the sand, and they cannot be driven away – they are the owners here.
Entertainment for children

The Cape of Good Hope Nature Reserve will delight children with many species of animals that are not found in another country. Here you can learn a real lesson from nature in practice. However, it should be remembered that not all attractions are suitable for children of all ages – for example, trekking, lasting several hours, along steep paths, in gusts of wind. And that not every animal you meet on the road can be friendly. Even baboons – they are just waiting to take what they have in their hands from tourists.

The Cape of Good Hope may be an extremely attractive place for children, but it is more attractive for the elderly than for toddlers, provided that the parents take care of their safety.