All guests of the Siberian city as one note: Krasnoyarsk is a territory of contrasts. It combines the beauty of pristine nature and the genius of engineering, a harsh industrial environment and the richest cultural potential, serenity and determination. Krasnoyarsk knows how to delight and surprise. You can verify this by visiting the most interesting places that have become the hallmarks of the city.

Residents of Irkutsk, Kemerovo, Tomsk, Novosibirsk, Abakan and other nearby cities will be interested in spending a weekend in Krasnoyarsk.

Approximate travel budget for one person – from 3,500 rubles *. 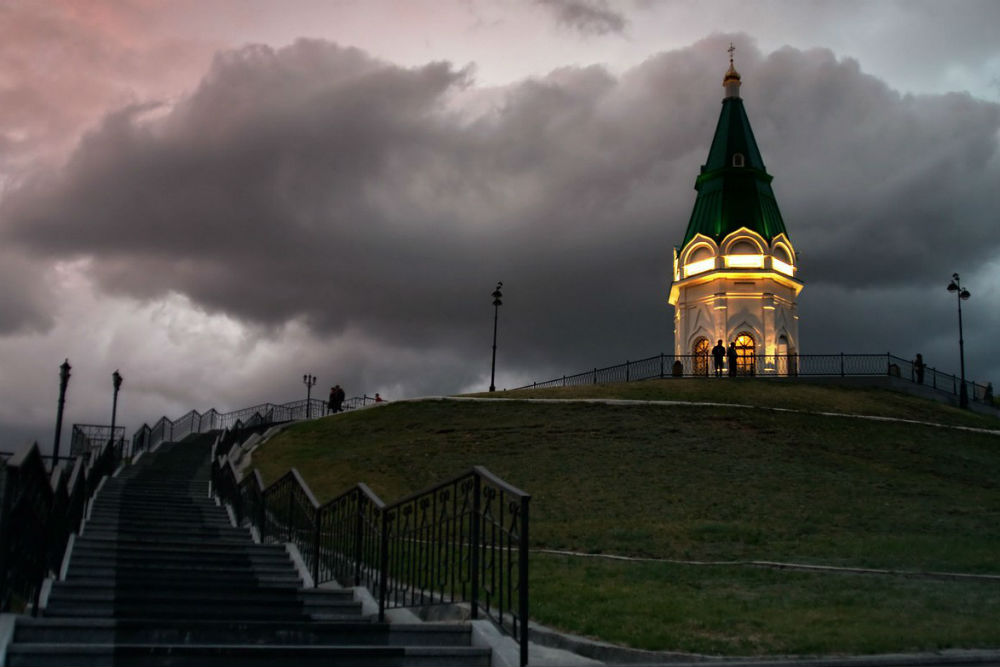 The chapel is the famous symbol of Krasnoyarsk. It is located on the top of Karaulnaya Mountain, where a pagan temple was located during the time of the ancient Kachin Tatars.

At the beginning of the 19th century, the merchant Novikov built a wooden chapel, on the site of which, half a century later, the current structure appeared, erected at the expense of the gold miner Pyotr Kuznetsov.
From the site on Karaulnaya Gora you can see the entire central part of Krasnoyarsk. Vasily Surikov painted his paintings here. And in 1887, the inventor of the radio, Alexander Popov, observed a solar eclipse from the site next to the chapel.

The Paraskeva Friday Chapel can be seen on a ten-ruble note. You can also hear this place. Exactly at noon, a cannon shoots from here. The 1938 model howitzer was installed in 2001 according to the idea of ​​the Cossacks. After all, almost four centuries ago, it was the Cossacks who became the founders of the fort “on Krasniy Yar” and fought using cannons. 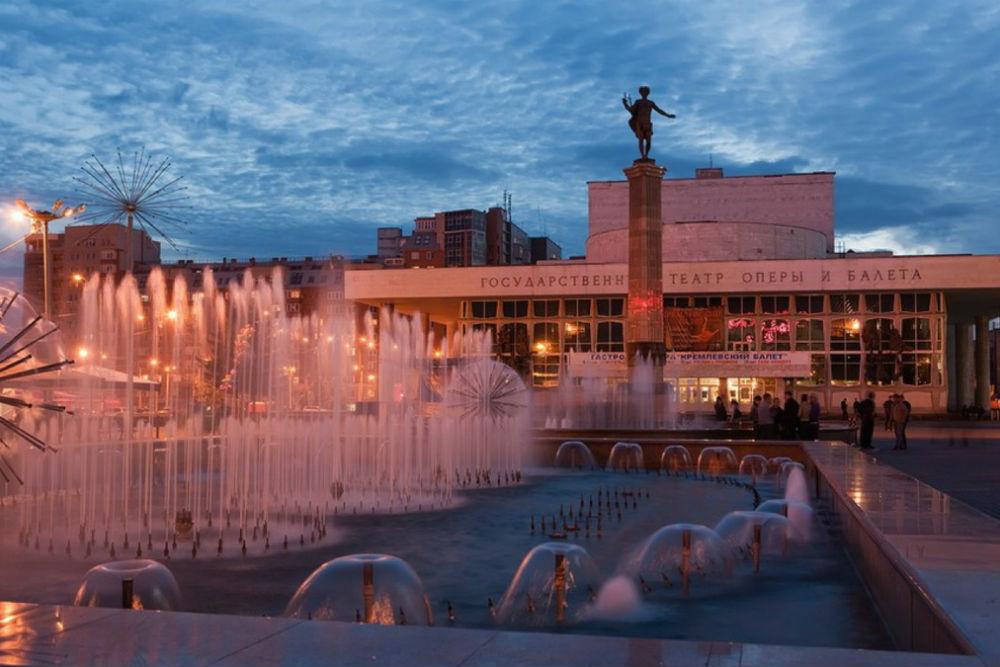 The square in front of the Opera and Ballet Theater is the heart of the city. All city holidays and festivities take place here. And, of course, many interesting objects are concentrated here: hotels, a theater, fountains, a monument to Chekhov, a 13-meter pedestal with the figure of Apollo, the highest building of the Yenisei River Shipping Company in the region. The territory is constantly being improved. In 2001, a clock tower appeared near the administration building, similar to London’s Big Ben. In 2005, the largest fountain in the city, “The Rivers of Siberia”, was opened on the lower tier of the square. This is a cascading light and music fountain, which is a complex composition of bronze and marble. It is decorated with statues of seven nymphs, which symbolize the small rivers of Krasnoyarya, and a huge sculpture of Father Yenisei.

Address of the Opera and Ballet Theater: 2 Perenson Street 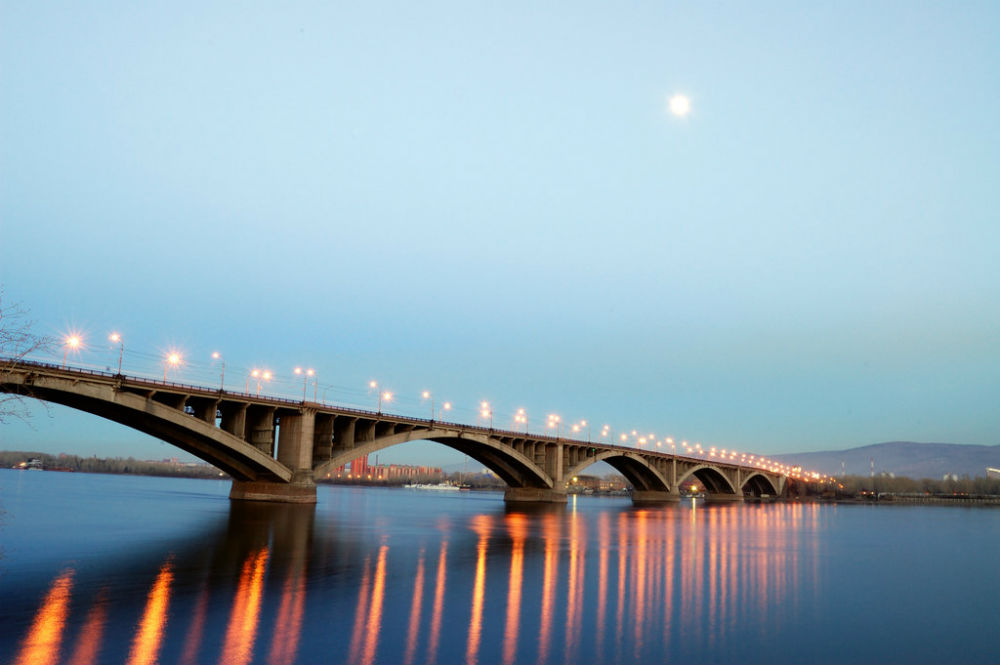 Embankment of the left bank of the Yenisei and Communal bridge

Walking along the banks of the mighty Yenisei is a special pleasure. The length of the footpath along Dubrovinsky Street is nearly 3 kilometers. And local sights are found almost at every step. On the arrow – the Museum Center “Peace Square”, a monument to the Siberian writer Viktor Astafyev, further – the river station, the museum of local lore. In the center of the embankment is the Communal Bridge. At the time of construction in the mid-50s of the XX century, it was the longest bridge in Asia. For the uniqueness of the technology for the installation of reinforced concrete semi-arches and the closing of the vaults afloat in the span, the object was included in the UNESCO reference book “Bridge Building for the World.” By the way, the Communal Bridge is another symbol of a ten-ruble bill.

Where is located: Dubrovinsky street, the bridge connects the banks – from Weinbaum street (left) to Predmostnoy square ring (right) 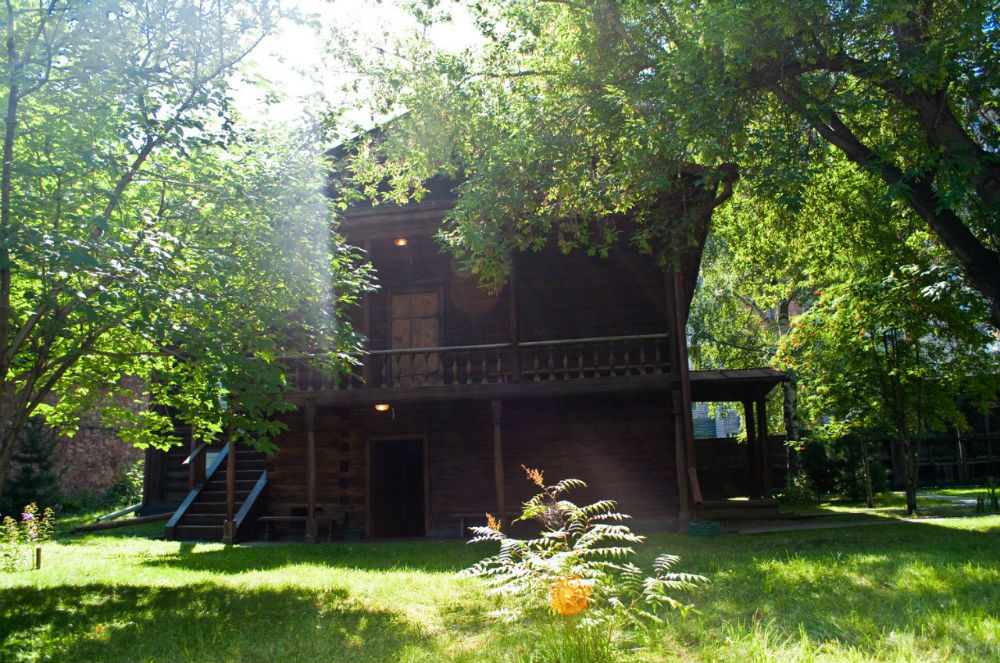 In the very center of Krasnoyarsk there is a unique house to which a wooden sidewalk leads. Both outside and inside the courtyard – the atmosphere of pre-revolutionary Siberia. The famous artist Vasily Surikov was born and raised in this house. He lived here before entering the Academy of Arts, and has been here many times afterwards. It was in this place that many images of his future paintings were born and one of the last canvases was written – “Taking the Snow Town”. His mother and younger brother lived here until their last days. The heirs, the artist’s daughters, donated the estate to Krasnoyarsk.

The museum in the Surikovs’ house was opened for the 100th anniversary of the artist’s birth, in 1948. Visitors can get acquainted here with the life and work of the artist, the life of the Surikov family, the history of the Yenisei Cossacks. The museum hosts plein airs of artists, educational games, museum lessons and quizzes.

Address: Lenin street, 98
Opening hours: daily from 10 to 18, closed on Monday **
Poster of events on the website Museum: surikov-dom.com 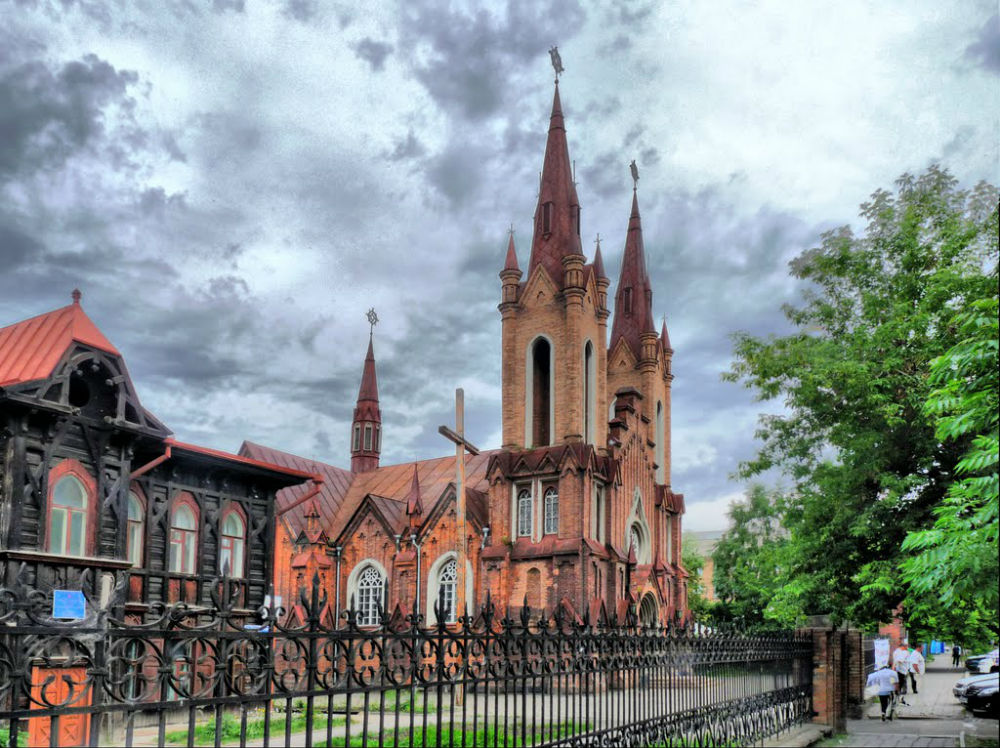 It’s worth coming here without even being a fan of classical music. The organ hall in Krasnoyarsk is a beautiful building built in the Gothic style, an architectural monument. Initially it was the Roman Catholic Church “The Cathedral of the Transfiguration of the Lord”. It appeared in 1911, replacing a dilapidated wooden church.

In 1936, the building of the temple was transferred to accommodate cultural objects. For a long time, devastation reigned here, and only at the end of the 1970s restoration began. In the fall of 1982, the temple first opened its doors as a concert hall, and a year later an organ appeared on its stage. Today the organ hall of the Krasnoyarsk Philharmonic is one of the centers of academic art in Siberia.

In the early 1990s, there was a revival of the Roman Catholic parish. And now one building combines a philharmonic society, an architectural monument and a church.

Address: 20 Dekabristov Street
Opening hours of the Organ Hall, poster and tickets for concerts on the Philharmonic’s website: krasfil.ru 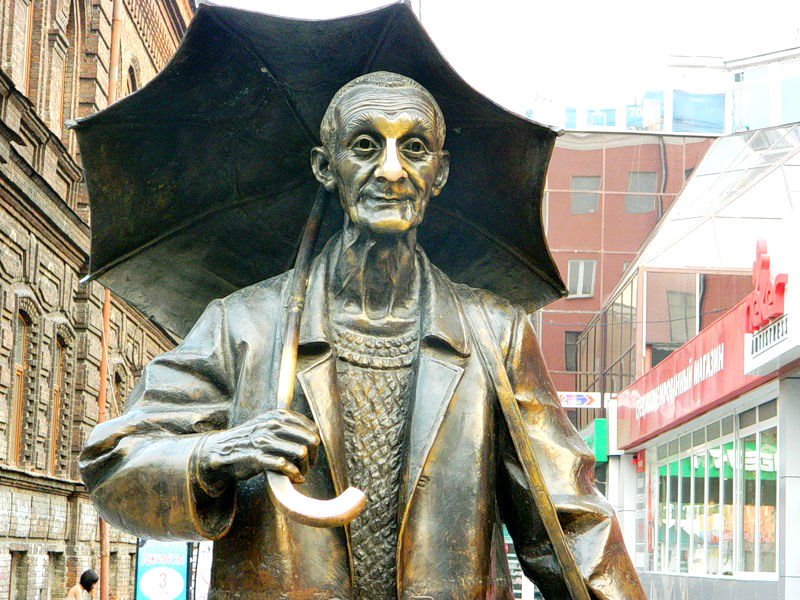 The sculpture of a cute old man with a large open umbrella and easel, installed near the Central Department Store, attracts the attention of all passers-by. The monument to the famous Krasnoyarsk artist Andrey Pozdeev appeared in 2000. The bronze man smiles touchingly at passers-by and flashes his nose. It’s all about the omen: they say that it is necessary to rub the artist’s nose and hold on to the handle of his umbrella.

Andrey Pozdeev is called “Siberian Matisse”. On the canvases of this painter there are bright bouquets, streets of his hometown, colorful landscapes of the outskirts of Krasnoyarsk, portraits of people.

Today, the master’s works adorn the Tretyakov Gallery and the Russian Museum, are kept in art galleries in Siberian cities, including Khabarovsk and in many other collections around the world.

Where is located: Prospect Mira, next to house number 85

Any specialist will reproachfully say that Krasnoyarsk cuisine does not exist – there are Siberian and Russian dishes. However, the local gastronomic flavor in Krasnoyarsk is definitely present!
The most striking example of this is the restaurant “Taiga Master”.

Here you can taste local fish – nelma, grayling, sturgeon. And, of course, venison, which comes directly from Evenkia. It is also worth trying lingonberries, pine nuts, ferns.
The interior of the establishment, which is made in the style of an Alpine chalet and decorated with photographs and memorabilia from the archive of the film crew of the film “Taiga Master” and the family of Vladimir Vysotsky, deserves special attention.

Collectible Austrian and German ski equipment is exhibited in the banquet hall. The fact is that the restaurant is located in the Bobrovy Log fan park, where the 2019 Universiade will be held. 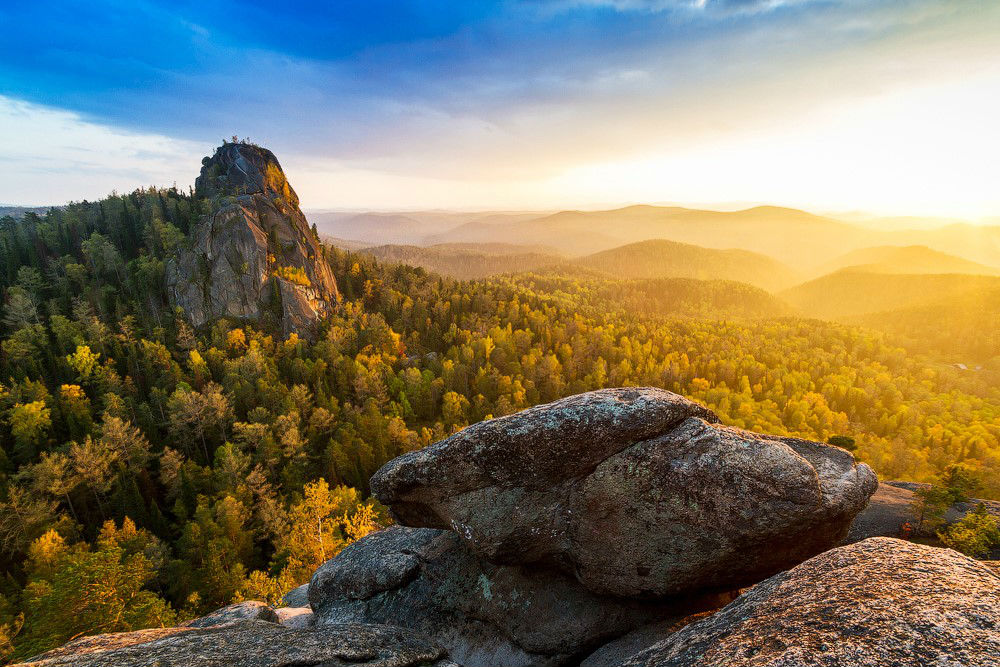 The Stolby nature reserve is a favorite place for Krasnoyarsk residents to walk. More than 350 thousand people visit it annually, sometimes up to 20 thousand visitors pass along the most popular route on weekends.

Interestingly, this is the only nature reserve in Russia, created at the initiative of the residents themselves to preserve the picturesque corner from deforestation and the extraction of natural stone.

The name “Pillars” is not accidental: the main attraction of the reserve is the syenite rocks, which, at the behest of nature, took the form of gigantic giants with guessed outlines of people, animals and mythological creatures.

The most popular is the circular route, which starts from the First Pillar, then through the rocks Granddaughter, Grandma, Grandfather, Feathers, Lion’s Gate, Fourth, Third and Second Pillars and back to the First Pillar and the Elephant.

Where is: Sverdlovskaya street, stop “Turbaza” (Central entrance)
The reserve is open every day during daylight hours
Map of the reserve on the official website: zapovednik-stolby.ru 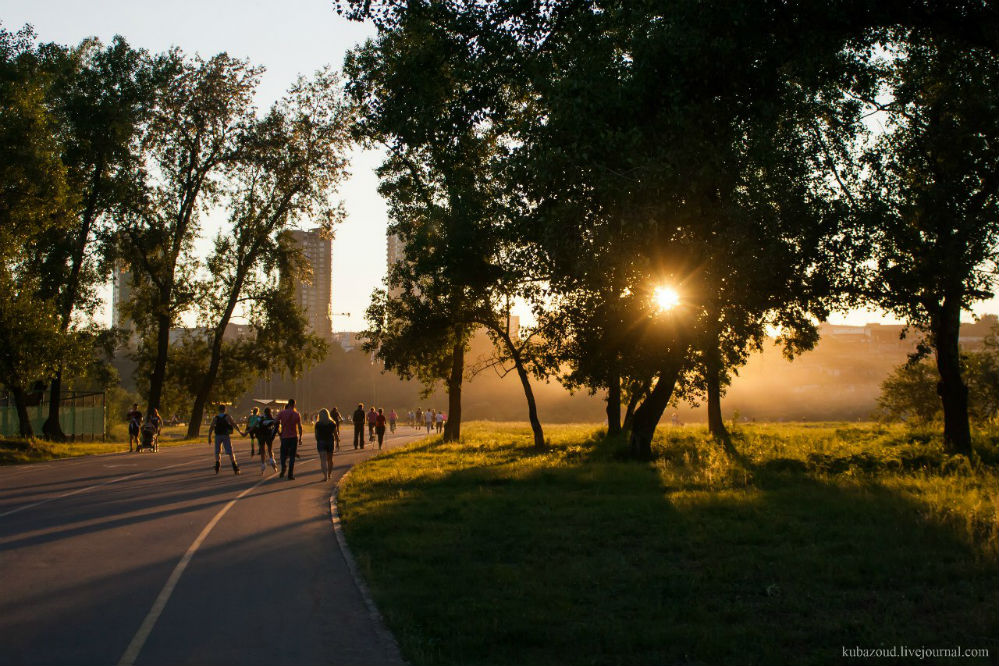 This island is the best place for outdoor activities. Here you can go for a walk, ride a bike or roller-skate, have a picnic on the grass, feed gophers and ducks.

Tatyshev is the largest island on the Yenisei within Krasnoyarsk. A beach area, an apple orchard and an arboretum, a children’s playground, an open-air library, sports and concert grounds, bicycle paths – all the objects of the island are countless. In winter, the largest ice rink in the city is filled here and there are ski slopes.

The island is connected to the banks of the Yenisei by two bridges – the October automobile bridge and the pedestrian cable-stayed bridge. Initially, the cable-stayed bridge was named after the founder of Krasnoyarsk, Andrey Dubensky. It was here, at the confluence of the Kachi with the Yenisei, that a detachment of Cossacks, led by Dubensky, landed in 1628. Later, the bridge was renamed Vinogradovsky, after the name of the architect-builder.

The cable-stayed bridge is a part of the Strelka architectural ensemble, which includes the building of the regional philharmonic society, the high-rise building of the KATEKNII, the shopping and office center. On the square in front of the Great Concert Hall, there is a monument to one of the leaders of the first Russian circumnavigation of the world, Commander Rezanov, and his grave.

The map of the island and the route map can be viewed on the website: tatyshev.ru 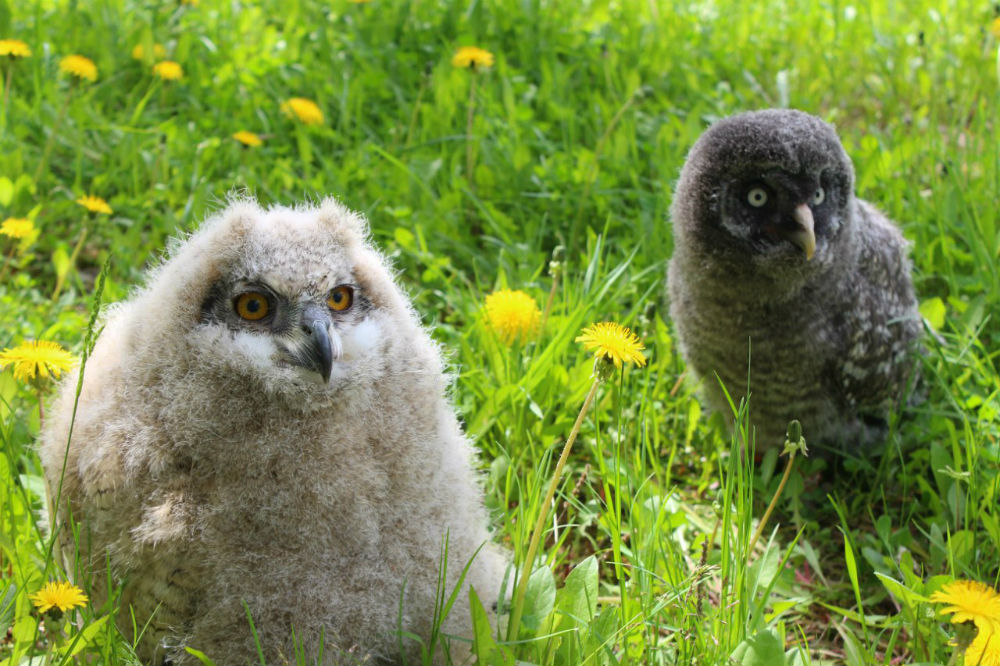 Roev Ruchey is the largest zoo in Russia. Its predecessor can be considered a living corner, created in 1947 in the Stolby reserve. The decision to create a large zoo was made in December 1999, and in the summer of 2000 the first stage of the facility was opened.

Today “Swarm Stream” is in the top five zoos in Europe in terms of the number of animal species. About seven thousand animals live here and more than seven hundred species are represented. The Swarming Creek has the only significant collection of mammals from Africa in Siberia: giraffes, white lions, zebras, wildebeest, chimpanzees, and penguins. The zoo complex includes one of the largest aquaterrariums in Russia. Also in the park are more than 600 species and 140 thousand plants.
It is interesting to walk in the park at any time of the year. Festive events and large-scale city events are constantly held here.

Address: Sverdlovskaya street, 293
Opening hours for visitors: daily, without breaks and days off **
Schedule of events and cost of attendance on the official website of the park: roev.ru

Author of the text: Daria Teplykh