Anapa is a city with a rich history, a variety of natural and man-made attractions. According to different versions and from different languages, the name of the city is translated as “table edge” (the city visually resembles a table ledge), “mother’s cry” (there was once a slave market here), “two sisters” (two bays).

Anapa is also known as the All-Russian children’s health resort. There are hundreds of family sanatoriums and boarding houses, and for children there is Pionersky Prospekt, a 10-kilometer-long street, on both sides of which there are children’s camps.

Going here for the weekend will be interesting for residents of Krasnodar, Gelendzhik, Sochi, Stavropol, Rostov-on-Don, Pyatigorsk, Mineralnye Vody and other nearby cities, the road from which will not take long.

How interesting it is to spend a weekend in Anapa and what you should definitely pay attention to, we will tell you in this article.

Beaches: 40 kilometers along the sea 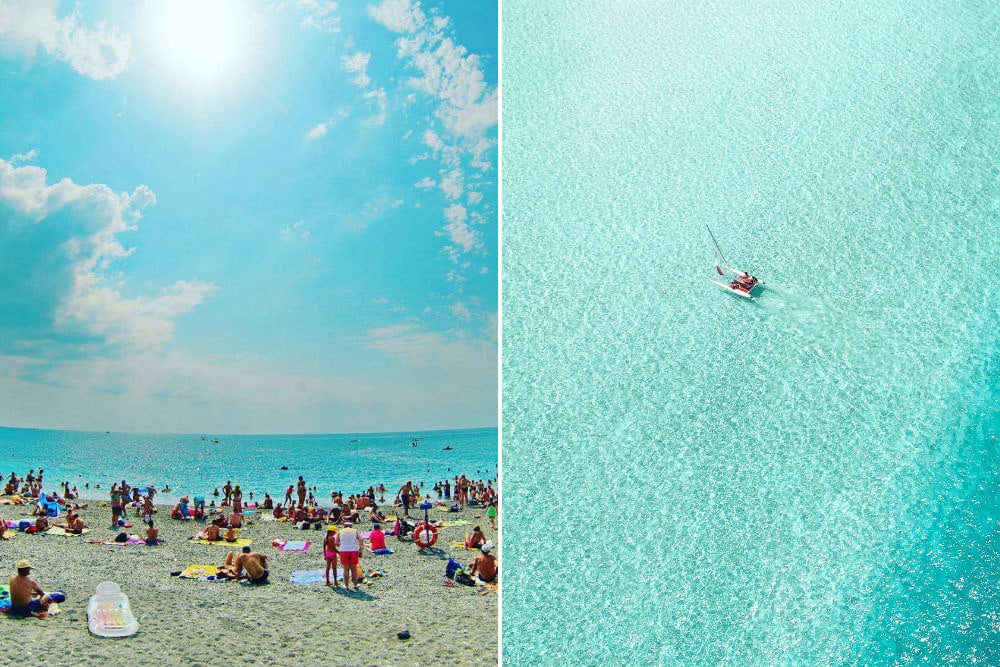 Choosing Anapa, you do not have to think long about “pebbles or sand”. There is everything here: large boulders, near which small fish swim, and small pebbles, and wonderful golden sand with and without shells.

The beach is divided in the center of the city embankment: to the left – pebbles, to the right – sand. Therefore, when in Anapa you want to remember in which side a particular settlement is located, then it is enough to pay attention to the coast. To the left and to Utrish itself – pebbles, to the right and to the Bugaz Spit – sand. And in the center – the only water-skiing stadium in Russia, located in the water area of ​​the sea – is a place of attraction for domestic and foreign athletes.

Lifehack! Closer to August, Anapa beaches in places are covered with mud washed ashore. But! Locals know one secret: there is no ooze on a pebble beach. And it is much less in places where there are not very many tourists. 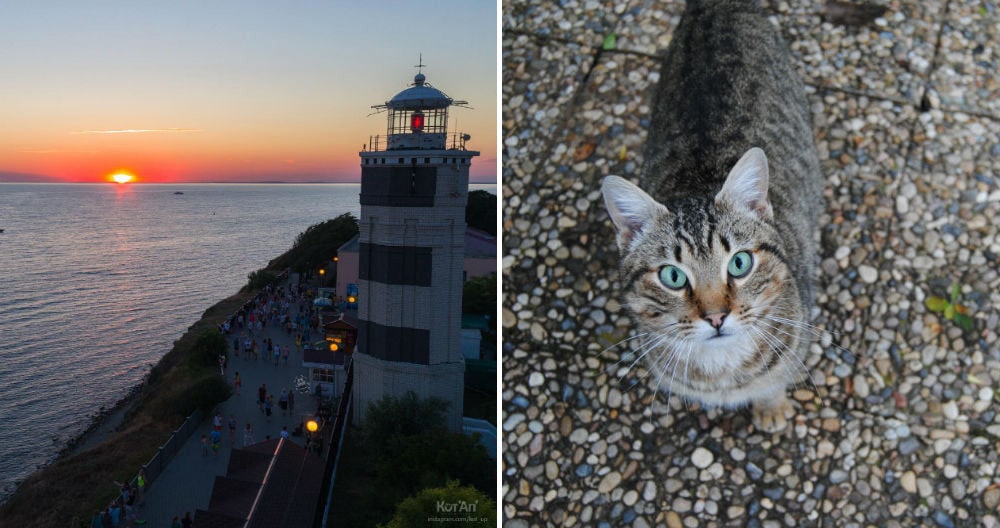 The city embankment of Anapa is a long street along the beaches, paved with tiles and has long been chosen by cats, which is why the resort is often called the city of cats. They are everywhere, no one bothers them, they are loved here, and they brazenly use it.

There are many sculptures on the embankment. Some of them are the legacy of the Soviet era, while others are designed to entertain tourists. For example, a monument to a vacationer, where a muscular guy with glasses sunbathes in the sun. It is also called Kuropach (as the locals call tourists).

So if you also heard “kuropach” after, then do not worry. It means that you are a real tourist who is loved in Anapa.

Among the buildings encountered along the way, there are many interesting ones – in the form of cubes and sailing ships, and the most remarkable will be the Anapa lighthouse – the faithful guardian of the bay, giving signals to ships at sea.

Together with the lighthouse, radar stations in the form of white balls, located on the top of Mount Lysaya, carry out their service. These balls are popularly called “dinosaur eggs”, and they will easily catch the eye of a curious tourist.

Location: on the Upper embankment between Krepostnaya and Protapova streets

Heritage of Gorgippia or an open-air excavation site 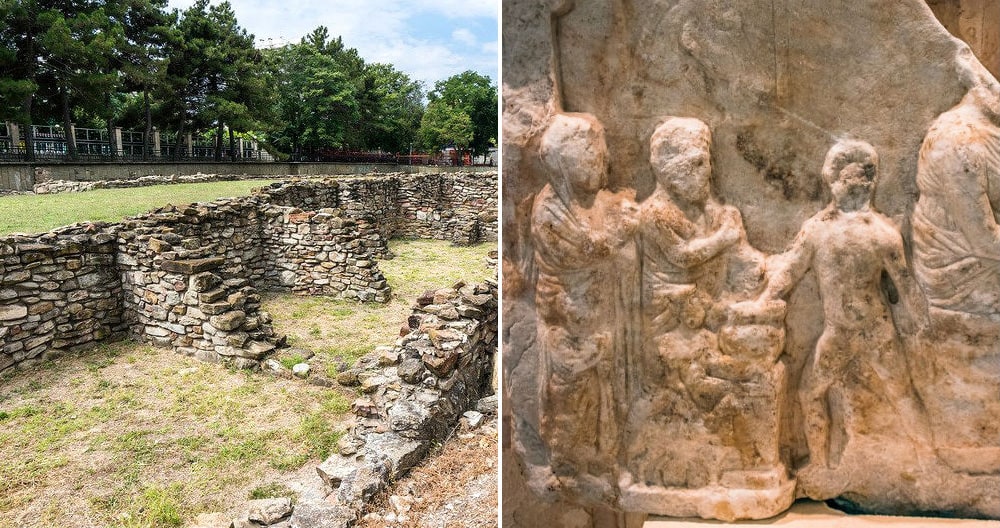 In the center of Anapa, within walking distance of all other city attractions, there is the Gorgippia Museum-Reserve.

It got its name in honor of the city, which in antiquity stood on the site of present-day Anapa and was 40 hectares of land surrounded by fortress walls. It once hosted annual sports events – heroes, which attracted athletes from other kingdoms and fought for the right to be the best of the best.

There is an excavation site on the territory of the museum. During the tour, the guide will tell you in more detail where the houses, streets, wineries, resting places and burial places were located. The city reached its greatest prosperity in the 1st-2nd centuries AD. e., becoming a major trade and handicraft center of the Bosporus kingdom.

Since its existence, enough valuable artifacts have remained, by which one can judge the wealth of the inhabitants and the type of their activity. The museum has a permanent exhibition of that time.

Cost of visit: 200 rubles
Address: Naberezhnaya street, 4
Page in the social network
Opening hours: Tue-Sun from 10 am to 6 pm, closed on Monday **

Monuments and the City of Military Glory 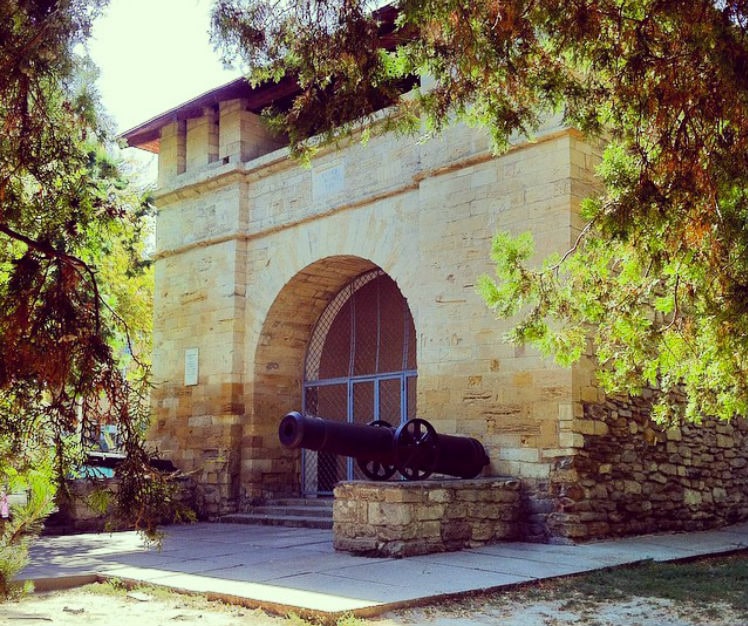 One article does not cover everything that experienced guides can tell about, but everyone who visits Anapa should know what it cost to return this resort town to the borders of the Russian state.

Russian gate – part of the fortress built by the Turks in 1783. This is the only surviving fragment of the milestone that Russian soldiers managed to overcome in 1828. The gate was named Russian in honor of the 25th anniversary of the liberation of Anapa from the Turkish yoke.

A bust of the ataman Alexei Danilovich Bezkrovny , in 1828 the commander of a separate Taman detachment, consisting of Cossacks and regular units, who distinguished themselves during the capture of the fortress, was erected near the gate.

But earlier, Ivan Vasilievich Gudovich distinguished himself in battles on these lands. As the commander of the Kuban corps and the head of the Caucasian line, he took Anapa by storm with a 7-thousandth detachment (June 22, 1791), which was defended by a 15-thousandth Turkish garrison. A monument to him was erected at the local history museum of Anapa, a block from the Anapa lighthouse.

Another name that everyone knows in Anapa is Dmitry Semenovich Kalinin – Hero of the Soviet Union, captain, commander of the 2nd reconnaissance detachment of the Black Sea Fleet Headquarters. Surrounded and wounded, he did not surrender; having used up all the ammunition, blew itself up, destroying a total of up to 30 enemy soldiers. Noting the feat of the Soviet officer, the German commander, who was in charge of the defense in the Anapa region, ordered to bury Dmitry Semyonovich Kalinin with all military honors. Now along the Varvarovka-Sukko road there is a large monument to Kalinin, which can be seen from the window of a shuttle bus. 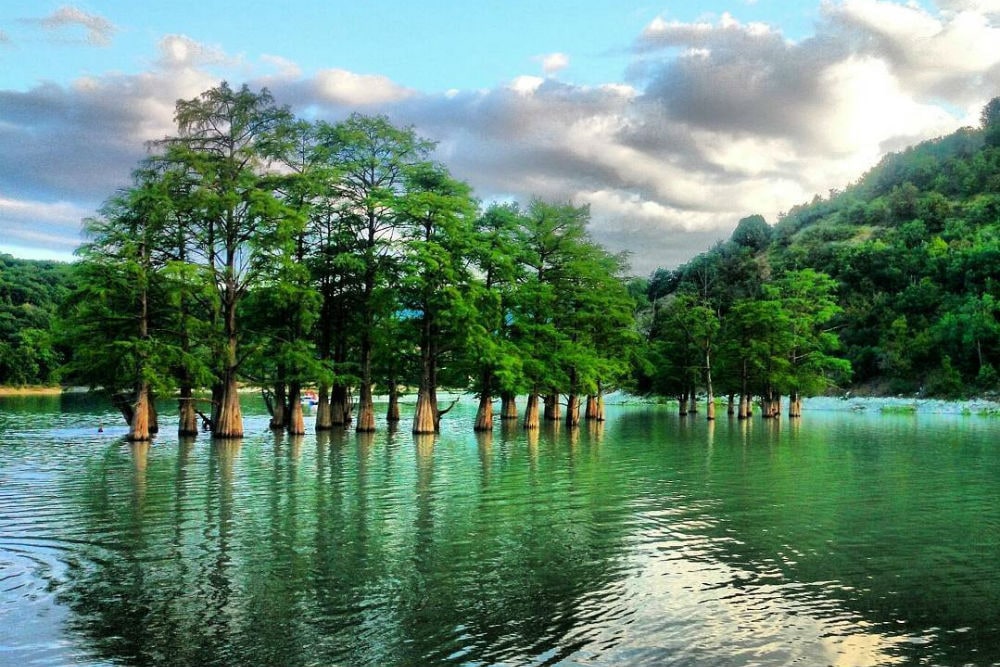 15 kilometers from Anapa is the village of Sukko, where American marsh cypresses grow in the lake, next to the village. Not all locals know about this natural attraction, and tourists – even more so, but thanks to the development of local infrastructure, the Sukko Valley is becoming more and more popular.

Next to the lake there is another entertainment for tourists – the Lion’s Head castle. Built in the medieval English style, it receives over a thousand spectators daily every season for its performances of knights in armor, wild barbarians and brave Amazons. Every year, artists and directors put on a new performance, so their stories are always interesting even to those who come to Anapa not for the first time. Under the vaults of the castle there are dining rooms, pottery workshops, a shooting gallery and photo zones. Also, after each performance, you can take a picture with the artists or on horseback, with the blade raised up.

If you go around the castle on the left, you can find yourself in a real African village, where the aborigines have mastered a piece of land and created their own settlement there. In fact, this is the location of a dance theater with the participation of dark-skinned artists performing songs of the peoples of the world during daytime and evening shows, demonstrating costumes, history and narrating about the culture of the peoples of Africa. Artists easily find contact with the audience, engaging them in a fun interactive program.

Where is: Sukko village, 15 kilometers from Anapa
The fare to the place by minibus: from 42 rubles
The site of the castle « Lion’s head “
Ticket price for the performance in the castle: 500 rubles

Here the Black Sea bottlenose dolphins, walruses, beluga whales, northern fur seals are the main inhabitants and part-time artists. From Thursday to Sunday, the dolphinarium pool hosts a show in which a team of superheroes rescues the Galaxy, where a Pacific walrus plays the role of a princess. In addition to recreational activities, the center conducts research work and promotes scientific knowledge about marine mammals.

The inhabitants of the Black Sea and freshwater reservoirs of the Kuban live in the “Batiskaf” marine aquarium. Despite the fact that the Black Sea is considered one of the least inhabited seas on Earth, it is home to many interesting fish, for example, stingrays, flounder, sultan, sea ruff, stargazer, sea dragon – all of them can be seen here – and other representatives marine flora. 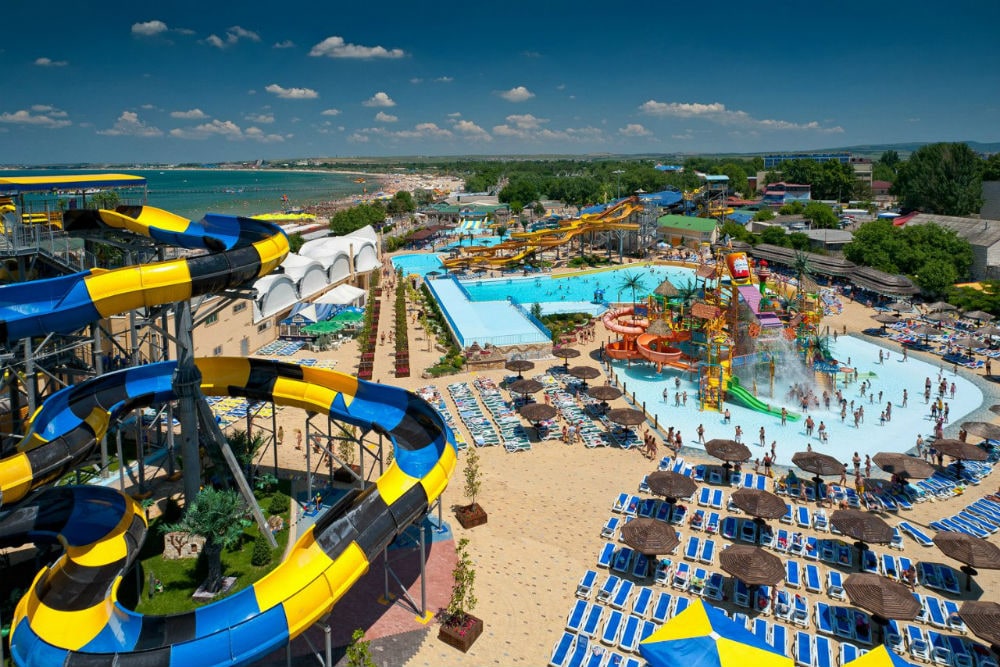 In the center of Anapa there is a water park “Golden Beach” – the oldest and largest. Here you can go down the slides along open chutes, on racing mats and on special inflatable rings. Attractions of varying degrees of extreme, both single and family, will not leave indifferent any visitor.

Olympia Water Park – in the village of Vityazevo – is a Greek-style park, which has the most impressive water attraction in Anapa – a slide 24 meters high, equipped with a special capsule for vertical start. A person can slide down such a slide at a speed of up to 12 m / s.

The Tiki-Tak water park is one of the largest in Europe in terms of displacement. There are 6 pools, two dozen different attractions, foam parties and dances in the fountains take place every day. 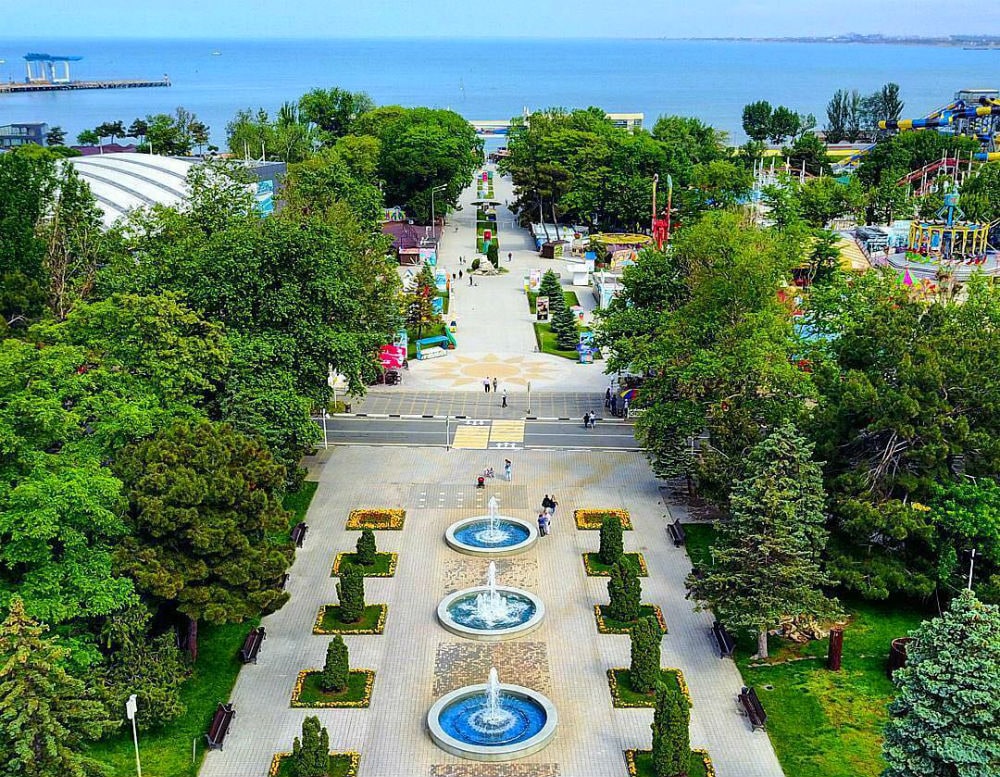 On the square in front of the city administration building there is a fountain complex with large (23 meters in diameter) and small (6 meters in diameter) fountains. At about 22:00 every day, they all simultaneously begin to glow in different colors, the jets simultaneously rise up to a height of 15 meters and descend to the sound of classical, jazz and modern pieces.

Location: Central square of the city

Aqua complex “Bora-Bora”: an oasis in an oasis 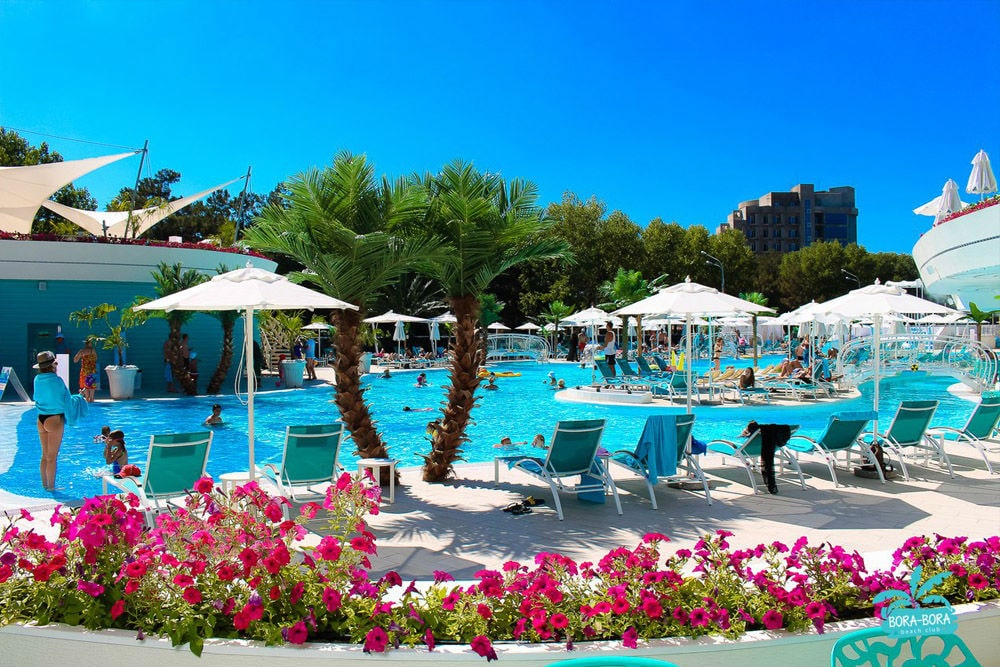 Bora Bora Beach Club Anapa is a trendy holiday destination that combines not only bars and restaurants, 6 swimming pools, a climbing wall and a surfing attraction, but also the largest and most popular dance floor. Last summer, the brightest performers of songs and electronic music of domestic and foreign show business performed here, the schedule of star guests for this season includes: Arthur Pirozhkov, Hannah, Timati, Elena Temnikova, Linda, Yegor Creed, Irina Dubtsova, MakSim, Basta, Mot and others.

Ticket price: from 1000 rubles
The cost of travel to the place by fixed-route taxi: 28 rubles
Website: bora-beach.ru
Address: Pionersky prospect, 20 A