The brightest, exotic and truly unforgettable action in the world is the carnival. It originates from the very existence of paganism. Literally translated, the carnival consists of two words: carne – meat and vale – farewell. Why such an unexpected combination? It’s simple: carnivals have long been held before the start of Lent.

In addition, almost all carnivals have similar features: these are the names of the days (Pink Monday, Fat Tuesday, Ash Wednesday), and the choice of the king and the queen, and delightful costume processions, accompanied by dancing and loud music. All carnivals are also united by the time of their holding – the month of February. Today, several carnivals are held in the world. Let’s consider the most famous ones.

By far the most popular is the carnival in Rio de Janeiro. At the opening ceremony, the mayor hands over the silver and gold keys to the city to the king of the Momo carnival. And for exactly 4 days and 4 nights the city is immersed in the atmosphere of music, dancing, fun.

In Rio, there is a sambodrome 600 m long and 20 m wide. It is here that the best dance schools compete in their skills.

In contrast to the Brazilian carnival in Italy, masks are a striking attribute. They allow residents to feel free and equal, regardless of social status.

But they are preparing for the Cologne Masquerade in advance, despite the fact that it also takes place in February. It is very symbolic that the opening ceremony takes place on November 11 at 11 hours 11 minutes. The highlight of this holiday is the enthronement of matriarchy, while men are deprived of their ties, since they are simply cut off right on the owners. This carnival ends with a demonstration of funny figures of politicians from papier-mâché. Spectators get tasty treats: members of carnival communities throw sweets into the crowd.

The mysterious islands of Trinidad and Tobago began to hold masquerades after the abolition of slavery. But unlike in the old days, now these are not elegant costume balls, but cheerful folk festivities. The islands are filled with the sound of calypso music, steel drums. Rum is preferred in drinks.

The Colombian Carnival is recognized as multicultural. It combines theatrical performances, folklore, dance, poetry. This holiday began when African slaves were given only one day off a year. On this day, many couples get married.

On the Cote d’Azur, carnival festivities last 15 days. The battle of colors, the Parade of Light are the brightest events. In the final parade, the Carnival King is burned.

The Spanish holiday is divided into 2 types – official and street. People dancing in great costumes, musical theaters, local music – all this can be seen throughout the week.

The carnival in New Orleans is surprising and at the same time breathtaking, as 400 chariots take part in it. At the request of the audience, the king and queen throw tin coins into the crowd. 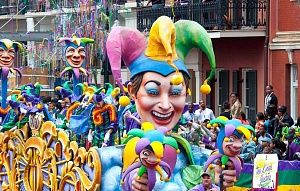 The festive procession also covers the Indian coast. Here is the presence of King Momo, and dances, and songs. A distinctive feature of this parade is a red and black dance during which people are sprayed with paint.

For small Switzerland, magic lights and special dishes are a necessary part of the masquerade: soup with toasted flour, sugar cookies, onion pie with cheese and mulled wine. Even children have the opportunity to have fun. In colorful costumes, they lend themselves to the fun and entertainment of clowns. And, of course, throwing confetti has become a bright custom.