I have always been sure that my wedding will be in Bali. And so it all happened. But with the honeymoon there was a hitch. The fact is that with our rhythm of life and statistics of movements in the region of the globe, there are fewer and fewer places where you would definitely want to visit and which really inspire. The last such bright dream on our list was South America. After her, a new cherished dream did not want to be.

We first went over in our head all the more suitable places for a honeymoon – romantic secluded islands with luxurious villas, washed by turquoise water.

No, it is better to have cozy cities with cute colored houses and medieval paving stones. And we, hand in hand, run to the next dinner at the next star restaurant.
Or maybe – a snow-white yacht, paving the way somewhere to the islands of French Polynesia.

But still, we decided that the honeymoon is a serious matter, so we must remember it for a long time. And bought tickets to Nairobi . 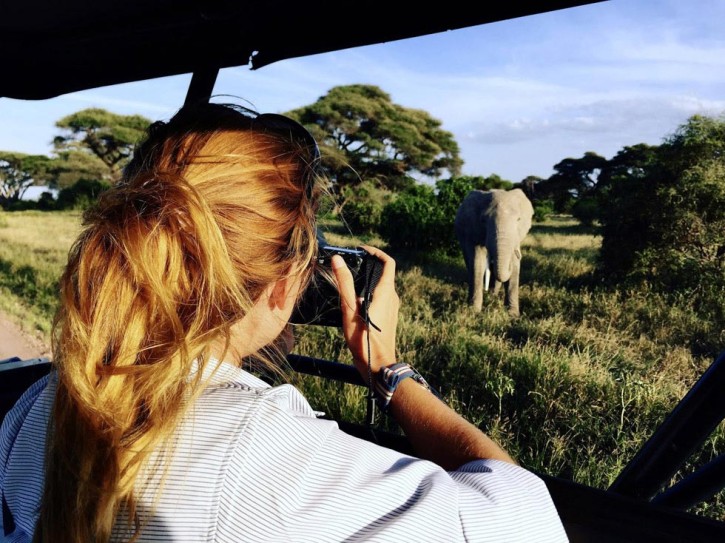 The plan was this – we fly to our first-ever safari to Kenya , and then add some romance and go to the fabulous Zanzibar .

We did not sleep for a day, almost missed the transfer in Sharjah, because there was a heavy fog and the airport was closed, we thought that we would turn into terminal residents for the next day.
And then for a long, long time we flew over the red, deserted, burnt earth. And I stared into the window without stopping and could not believe that Africa had happened in our life. We dreamed for so long, but after all, “it’s scary, malaria, it’s dangerous, don’t go children to Africa” ​​- well, you know, right?

Well hello Nairobi. In general, it so happened that most tourists try not to stay in this city for a long time. And in some ways I agree with them. But this was our first African city, so it was decided to allocate one day for it.

What should be done in Nairobi in time?

Cuddle the giraffes at the Giraffe Manor and get a kiss from these big-eyed beauties.
Chat with the elephant babies at David Sheldrick’s Center.
Go to the slums of Kibera. But first things first. 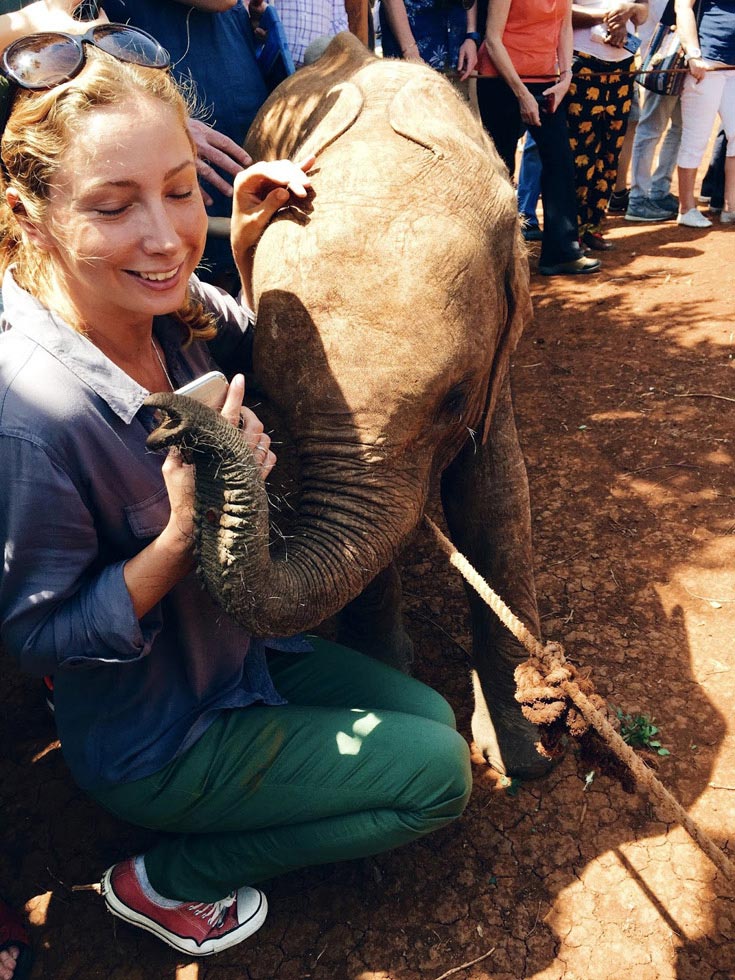 The nursery for orphaned elephants was organized by David Sheldrick in the thirties. Visitors are allowed in once a day at about 11 am. At this time, the elephants are fed milk, and then you can cuddle with them, stroke them and at the same time listen to a lecture.
Each elephant has a name, history and a whole dossier with photographs of how it was found and under what circumstances. 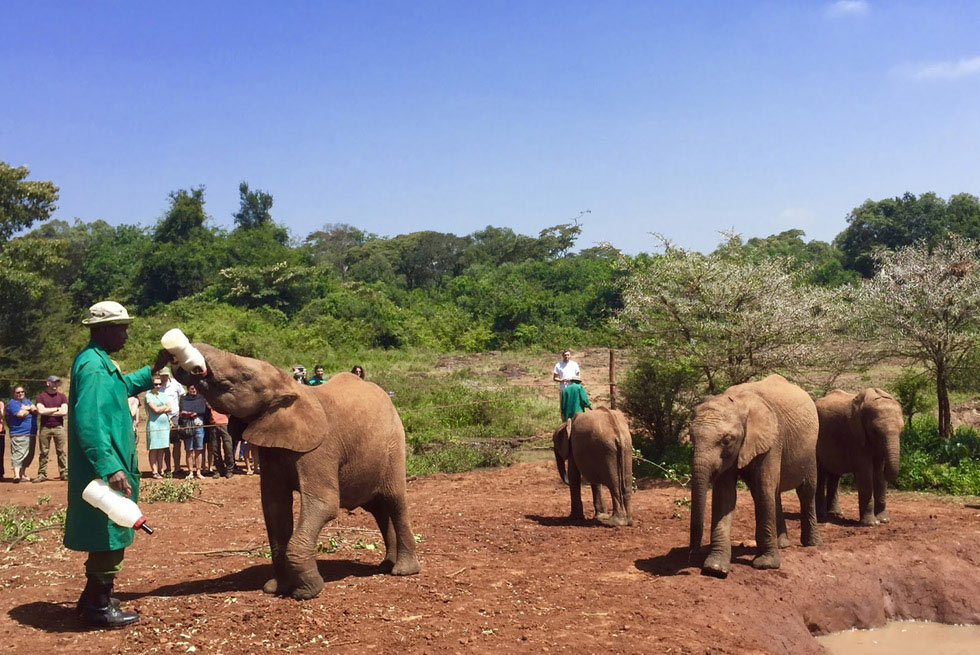 Yes, a particularly beloved elephant can be adopted. Rather, take patronage over him, I would say. Of course, you don’t take him with you. Every month you send money for its maintenance, watch how it grows and matures (according to the pictures), you come to visit him. When the elephant reaches a certain age, it is released into the savannah. There are no adult elephants at the shelter. Today, there are 28 elephants in the orphanage, if I don’t confuse anything.
They even have an account on @dswt insta, you can watch the babies in real life. 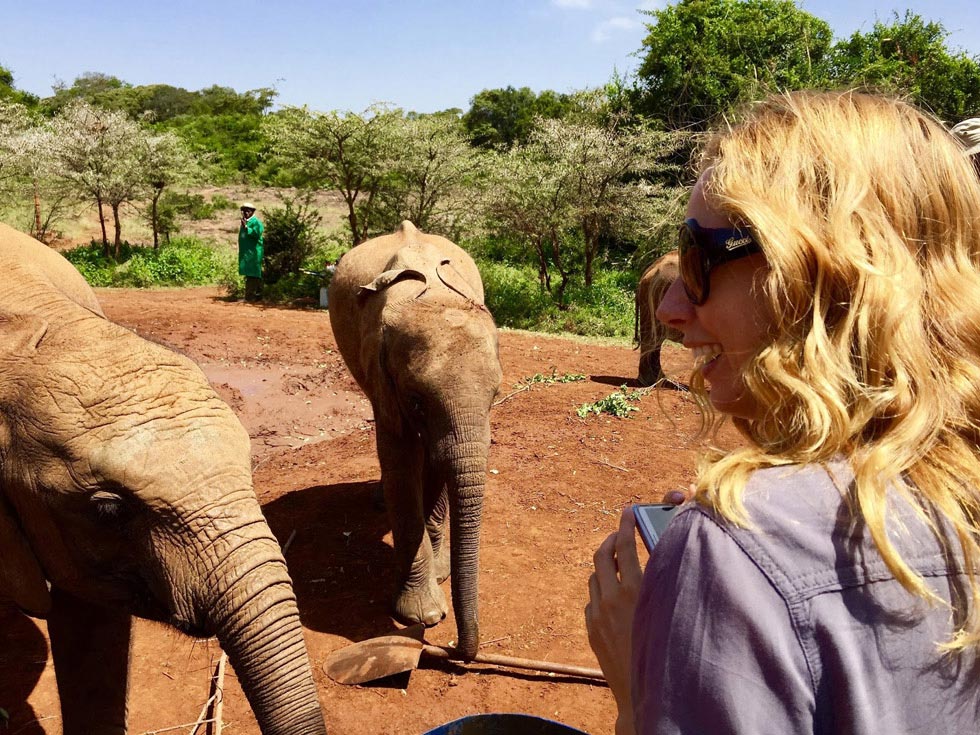 Not far from the center of Nairobi (literally 15 minutes by bus) there is an area called Kibera. These are the largest slums in Africa and one of the largest in the world. According to unofficial data, a million people have found their home here. I have seen terrifying footage of the reality of this place more than once and watched several programs about it, so when we decided to go to Kenya, the question of whether to go there or not was not even raised. But going to such places alone is not very good. 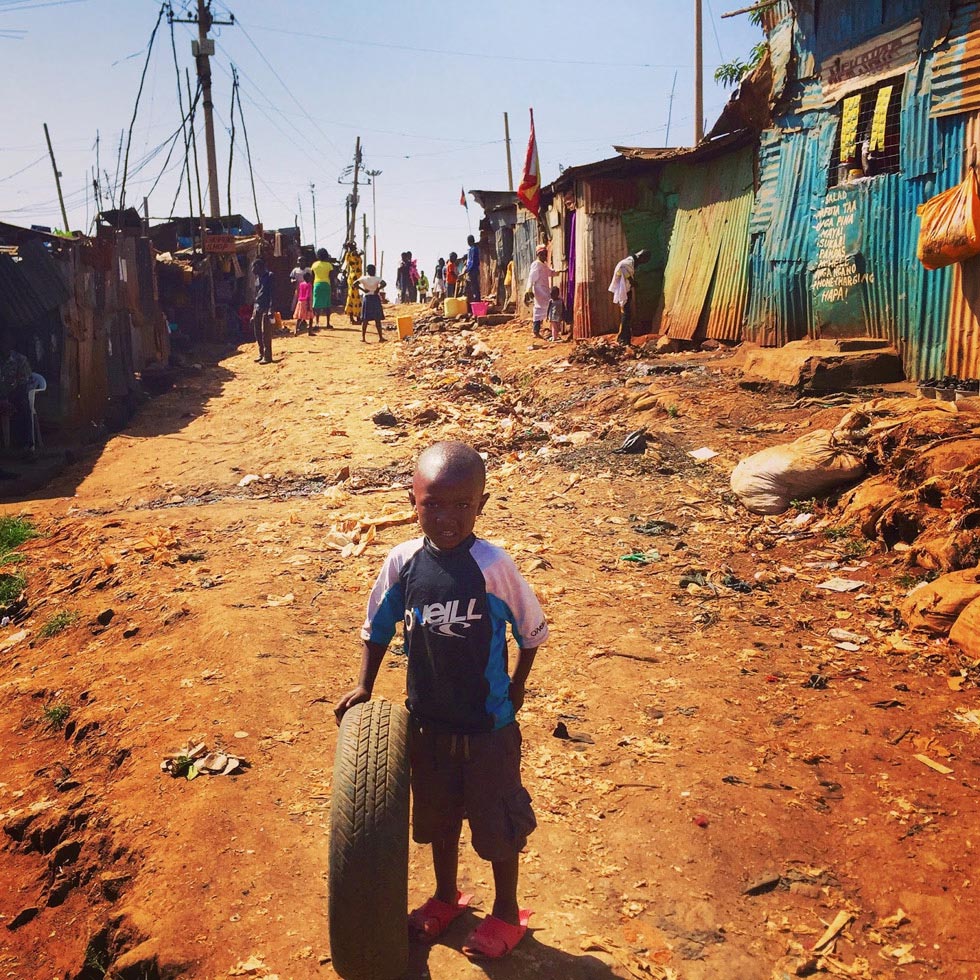 A quick search on the Internet brought us to Kibera tours. The guys themselves live in Kibera, they know everything from the inside and show the guests of the country a completely different Kenya. The City of Hope is also called Kibera. And also – “the friendliest slums in the world.” In general, we wrote to them and received confirmation immediately. I was even a little surprised – I wrote to the slums for the first time???? But today we saw all this with our own eyes. then hopeless darkness and complete apocalypse.
Houses are hammered from iron plates or molded from clay, rent per month from $ 10, there are no toilets in the houses! There is such a thing as flying toilets – i.e. packages that are then thrown out into the street. And public toilets.
Kibera – a city within a city. There are markets, shops, schools, beauty salons, cafes … Since it is difficult to find a job, everyone tries to open their own business in order to somehow survive. 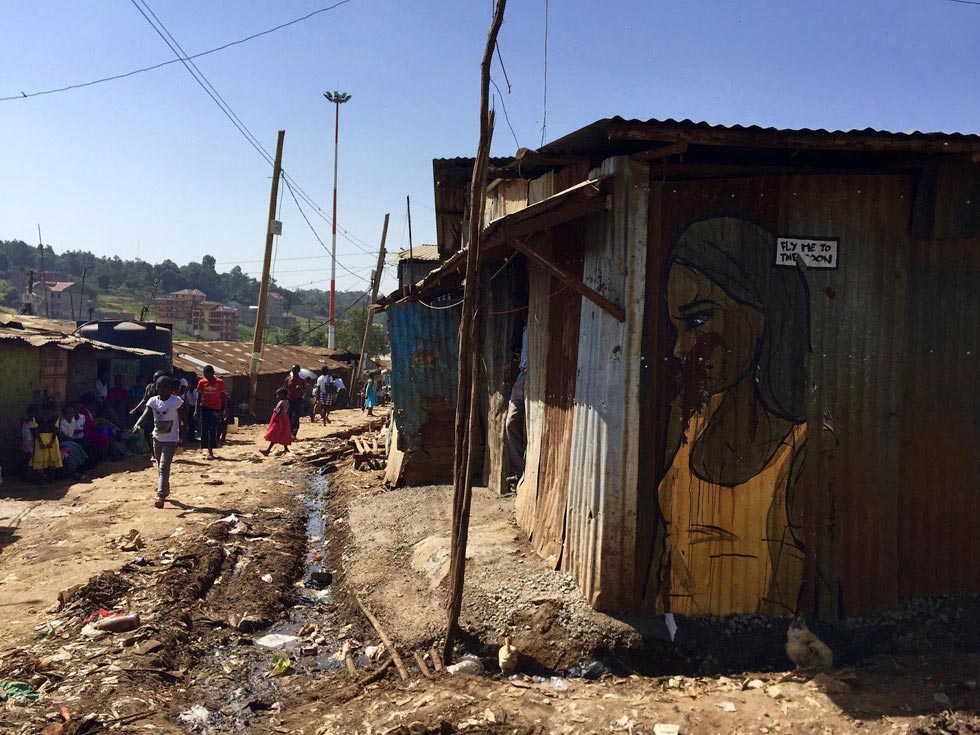 Life is in full swing everywhere, people are smiling, children are playing on heaps of garbage and it seems that there is no other Kenya – with hotels for 500 dollars a day, restaurants with an average check of 100, balloon flights over savannah for 900 for two …. Kenya, descended from the pages of glossy magazines, which tourists see. While there, it is impossible to believe that these two worlds exist with each other in the same reality.

In order to recover at least a little and get distracted, we rush to the third point of our program “to be in time in 24 hours” 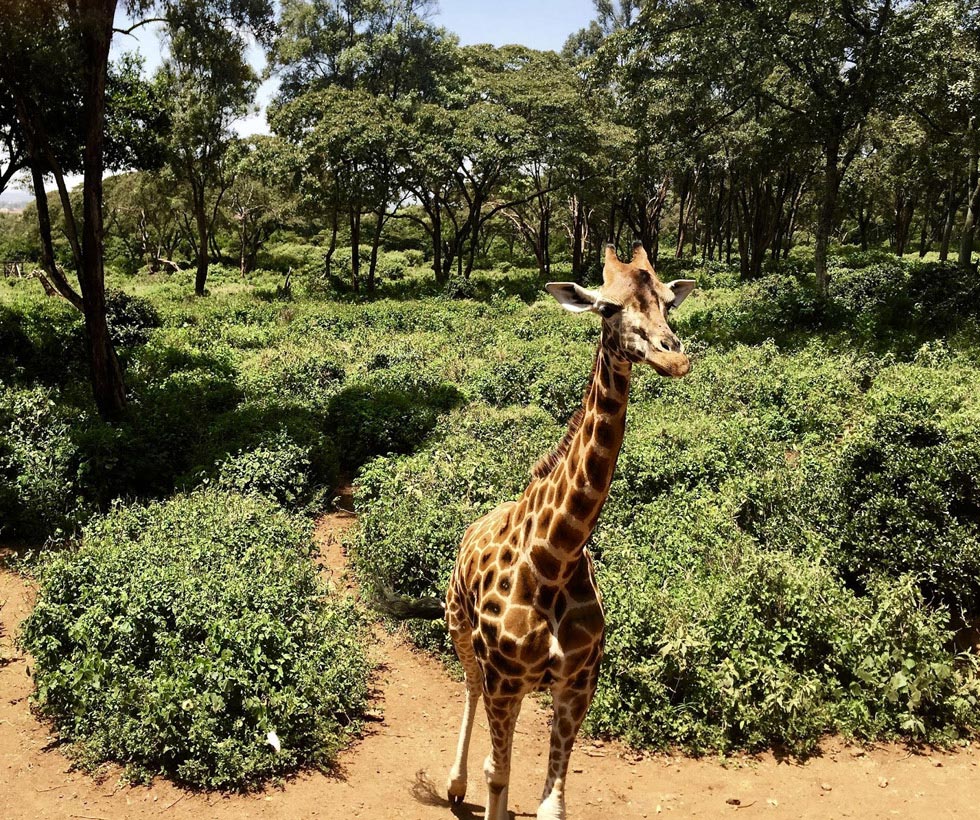 In Nairobi , or rather its surroundings, there is the Giraffe hotel. Giraffes there walk right through the territory, and also look into the windows of your room and even eat breakfast from a plate, from yours. I read about this hotel a year ago, when we were not going to Africa yet. And I was very fired up with the idea. But the price tag there is very inhumane. From about $ 500 a night. But you can come to the center of giraffes, also owned by the owners of the hotel, and there to chat with these cuties at will. This is an indescribable feeling. 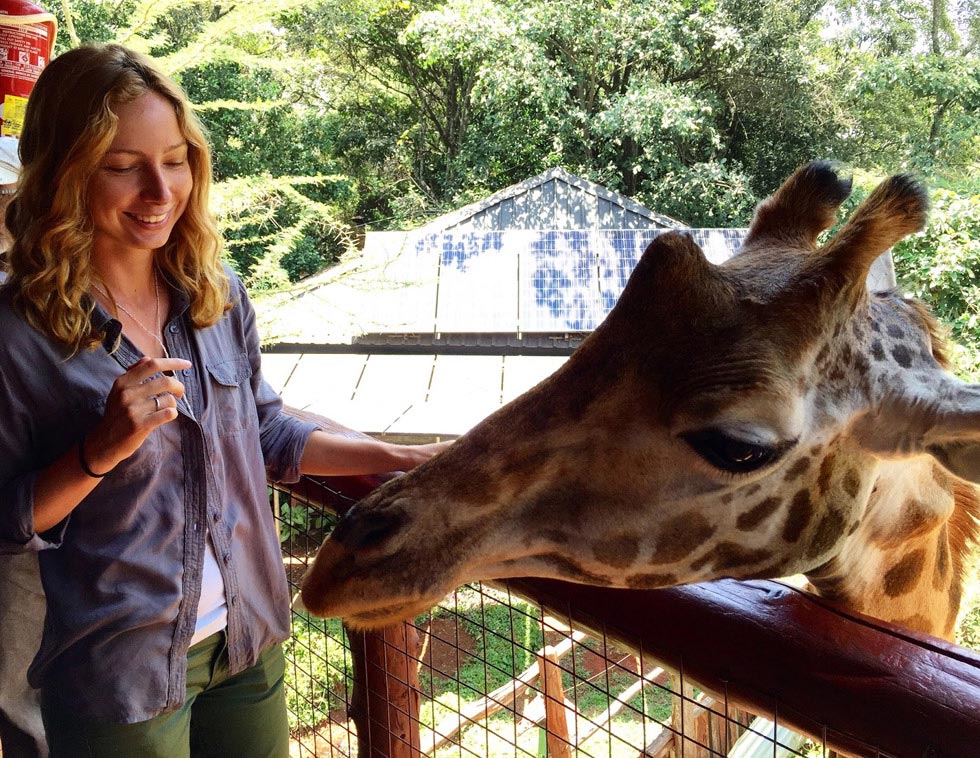 The day in Nairobi turned out to be intense and very emotional. This, of course, is not the city that you fall in love with and dream of returning, but it also has something to offer, believe me.

Well, the next day, early in the morning, we set off to explore the most impressive national parks of Kenya Amboseli, Naivasha, Nakuru and Masai Mara.
We have a five-day private safari, so there are only two of us, the driver and the snow-white (for now) handsome, our combat friend Land Rover Defender, who will plow the African dusty expanses.

Let’s visit the Masai tribe and watch their famous dances. We will see the Amboseli elephants.
We will spend two days surfing the open spaces of one of the best national parks in Africa – Masai Mara.
It is here that you can almost always see lions, often cheetahs, and, if you are very lucky, a leopard. And the rhino is easiest to see in Nakuru.
We will take a boat ride on the mystical Lake Naivasha, where dozens of families of hippos and thousands of birds live.
Let’s go in search of the white rhino and pink flamingos on the shores of Lake Nakuru.

Four hours drive from Nairobi – and we are already in a different reality. Our first afternoon jeep game drive through Amboseli National Park, a first look at Kili’s snow cap, the first elephants I can finally see in the wild. Not just nature, but the real, African savannah.

What to do in Amboseli? Photograph the elephants at sunrise against the backdrop of Kilimanjaro and swim in the pool overlooking the highest point in Africa. Oh yes, drinking coffee, having breakfast and thinking about the eternal, too, with a view of the beauty of Keely. An incomparable pleasure, I tell you. 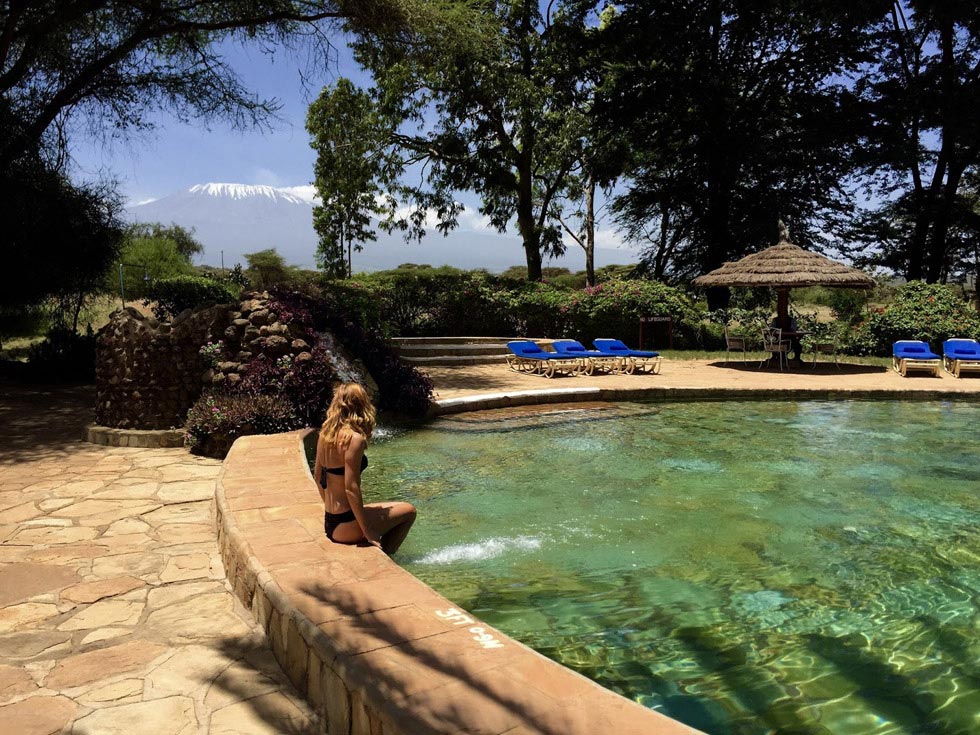 If you, like me, before arriving in Africa, the safari seems like an endless line of giraffes, elephants, zebras, lions, here and there crossing the road, I hasten to dispel your illusions. Today, for example, we got up at five, and at six we were already shaking along the dusty Kenyan roads, moving from one park to another. And this, for a second, is 7 hours away. Outside the window or lifeless savannah, or slum cities.
Then a quick lunch – and again in the jeep. Now to the national park in search of animals. And in the evening, when it got dark, we are exhausted, covered in dust and with matted hair, we fall without our hind legs.

But the most amazing thing is that we are incredibly happy and absolutely delighted with everything that happens.

Early morning. We are sailing on a boat on Lake Naivasha. To be honest, after reading the reviews before the trip, I did not expect anything from this lake. But we are absolutely delighted. Some kind of mystical place. And how many birds, hippos are there, and right on the banks zebras, antelopes, buffaloes, giraffes graze peacefully.

Today, near Lake Nakuru, we were even let out of the jeep for a walk. Although in all other national parks it is strictly prohibited.

Masai Mara National Park is an amazing place. We have seen so much today that impressions will last for half a lifetime. Some kind of revived channel National Geographic before our eyes.
The first half hour in Masai Mara – and now a family of lions lay in the bushes just five meters from us. Indescribable sensations.
And after a couple of kilometers a few more. And the most amazing thing is that there are five cars around, everyone is talking, the locks click, and the lions behave as if we are invisible.