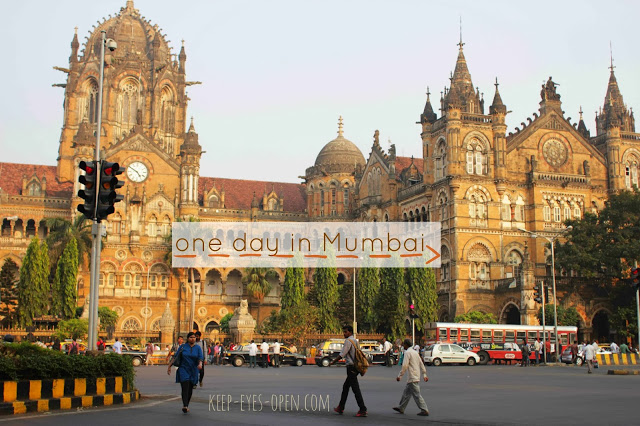 As I already told you, my trip to India began in Delhi. Then there was the magical Udaipur – for me one of the most beautiful and romantic Indian cities.

Part 1. From Delhi to Udaipur

And now Bombay was waiting for us – a city in which, as it seemed to me, I already know almost every corner thanks to all of you well-known book “Shantaram”.

I wake up early in the morning and the first thing I do is go to the window – the Arabian Sea, the boats, and if you hang down from the railing of the miniature balcony and look to the left, you can see the stone arch “Gateway to India” and the five-star Taj Mahal.

In general, the whole of Mumbai was called the gateway to India. Because most of the passengers arrived in India by sea and they disembarked mainly here in Bombay.

For the area of ​​Colaba (and we live here) such a view from the window still needs to be looked for. After all those hotels that we were offered the night before – and they looked like prison cells without windows and doors, with cardboard partitions and exactly one bed wide (not the largest) and, of course, with a shared bathroom – toilet, ours looks simple palace.

In general, the Kolaba area is one of the seven islands, on which a giant metropolis with a population of 18 million people is located. By the way, do you know what the population density is in Mumbai? 21,600 people per square km, it still does not fit in my head.

But there is no time to admire the landscapes, we have big plans for this day. We grab our cameras and are already hurrying through the sleepy streets of the city. This time there will be no croissants and perfect cappuccino (or rather there will be, but a little later :)), because now we are going to the largest fish market in Bombay, which has existed since 1875 – the famous Sassoon Docks. The stench is unimaginable, of course, everyone reacts very aggressively to the cameras, you can’t see crazy tourist enthusiasts except us, but it’s incredibly interesting to watch the seething life here. Especially when you realize that nothing has changed in this place over the past hundred years. By the way, almost the entire city buys fish from here. 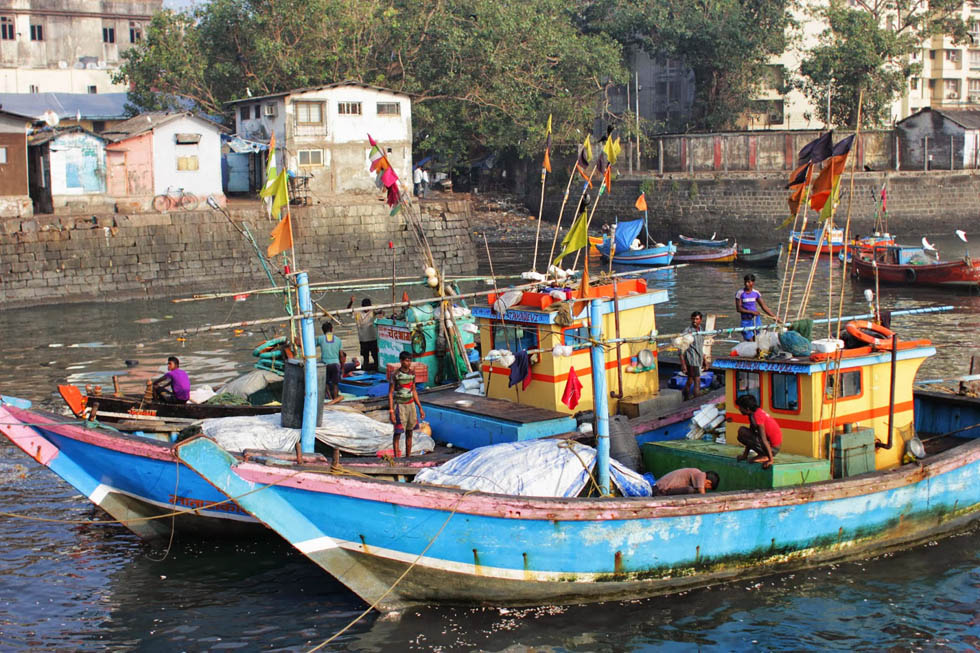 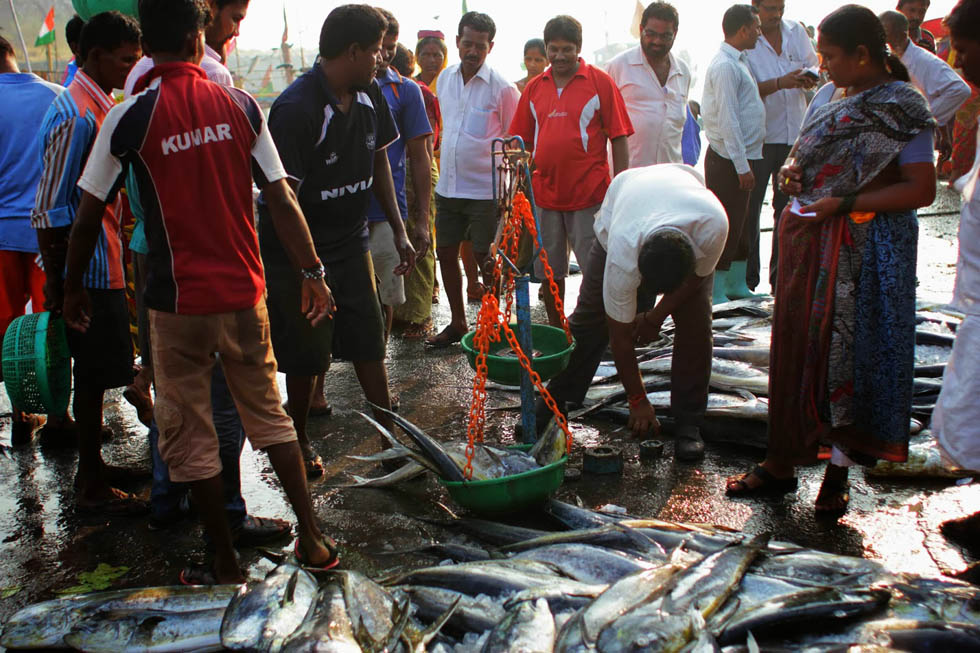 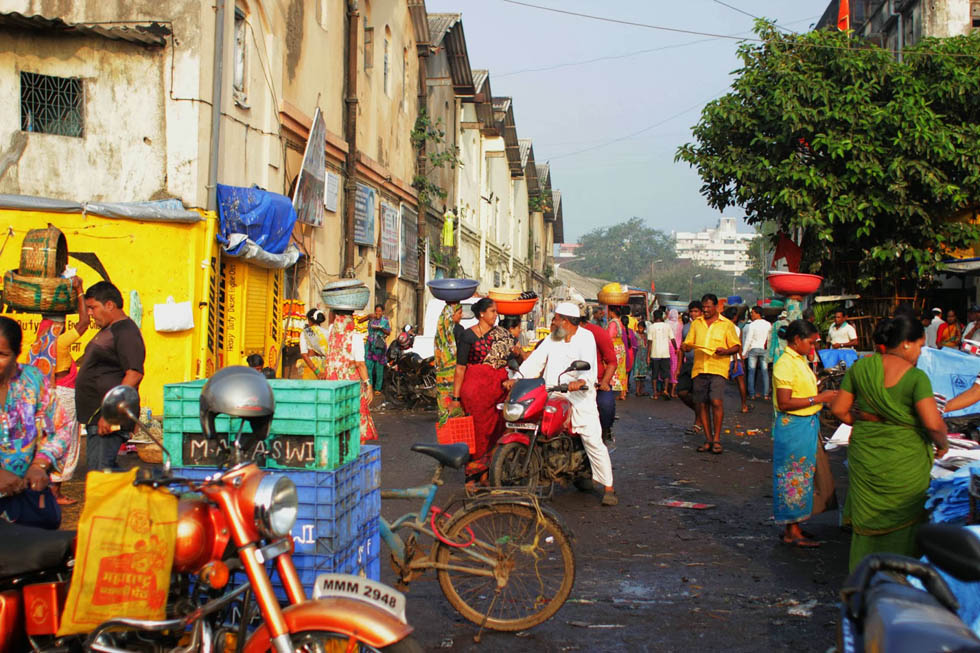 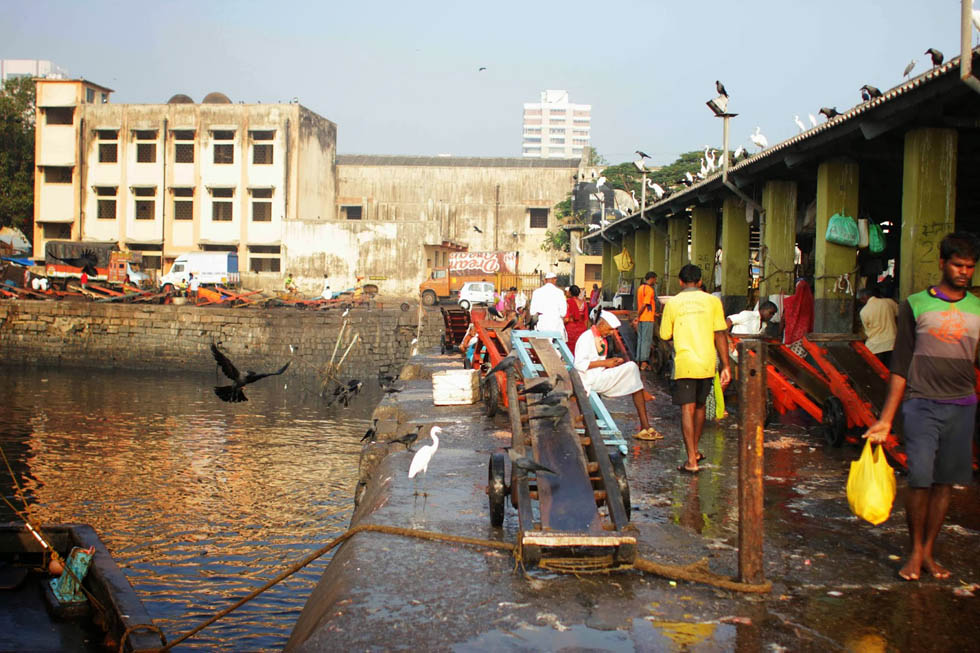 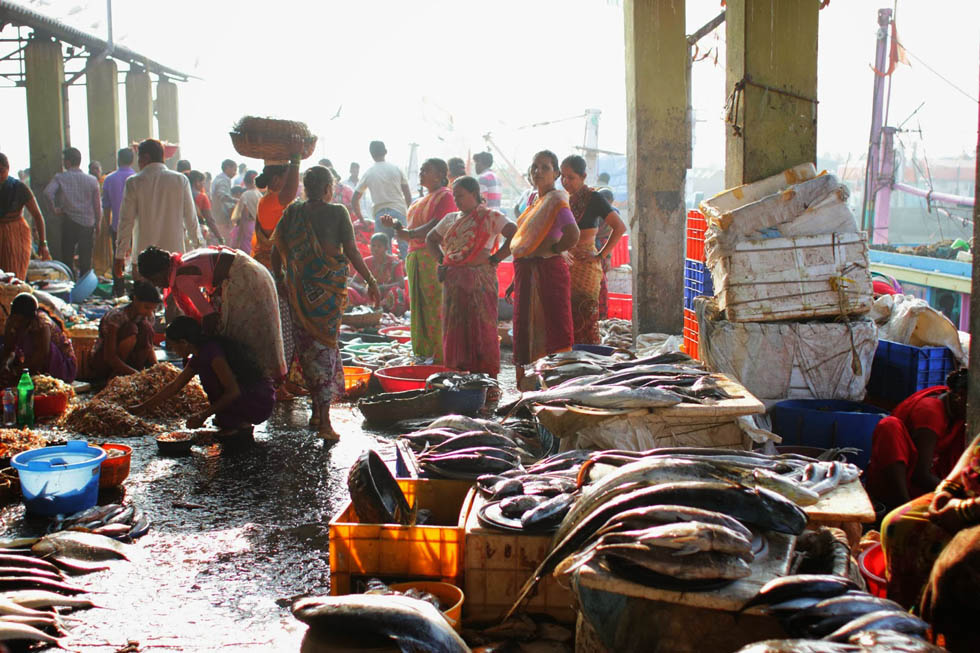 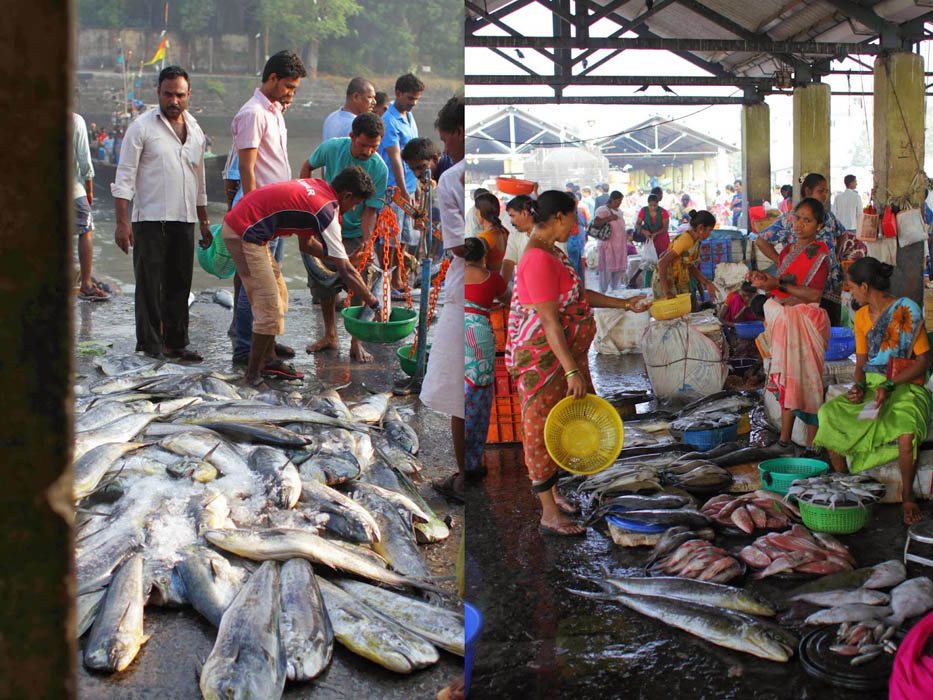 At about 9 am, brisk trade subsides, and we are content and deep in mud, we trudge to the hotel to change. Well and quickly have a cup of coffee. Where? Well, of course, there are no options here. In Leopold, of course. 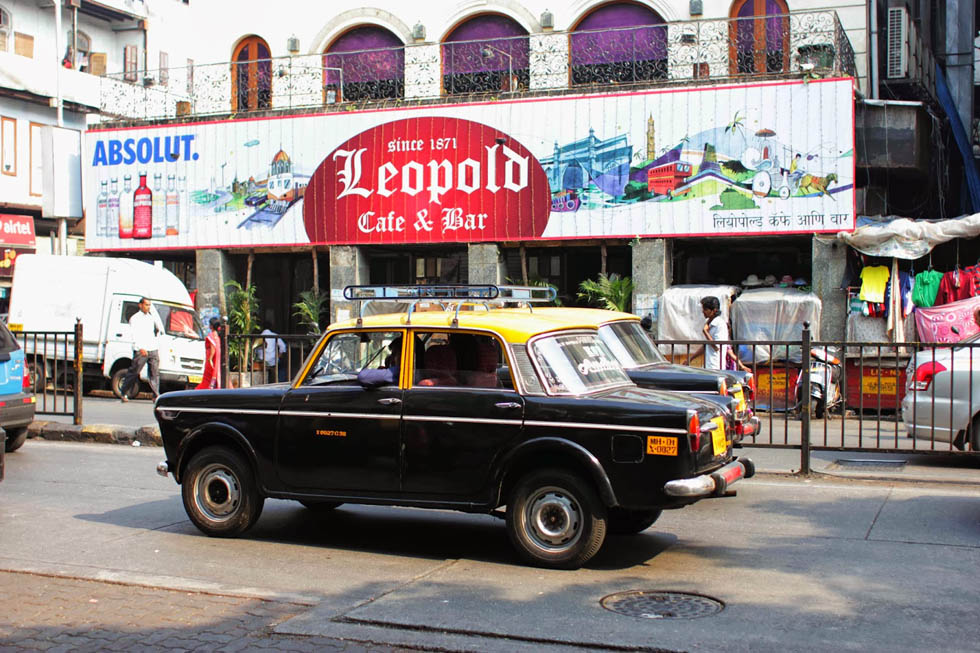 Perhaps the most famous and one of the oldest (operating since 1874) Bombay cafes, captured in dozens of films and on the pages of hundreds of books. Well, after “Shantaram” it became literally one of the main attractions of Bombay.

To be honest, I was absolutely disappointed – this always happens when you draw a picture of a place in your head, and then it doesn’t want to correspond to it in real life. Space prices like for India, everything is packed with tourists, and the atmosphere, I personally did not feel it.

3Black and yellow taxis haunt me, and every time I instinctively grab the camera to take another photo of another passing car. And double-decker red buses add charm and mood to the city – I really wanted to ride them. And without a goal, just climb to the second floor and drive from the final to the final.4

These are the signs at every step:

And also books, dozens – hundreds of books right on the street in such impromptu second-hand bookstores – so you want to spend a couple of hours and flip through each of them.
The colonial architecture of the central districts is amazing. No, it would not be surprising if we were walking somewhere in Europe, in London, for example. But we are here in India, and buildings such as Victoria Terminus, the main train station, are delightful and impressive in scale.

But as soon as you move a couple of kilometers away from the “Gateway of India” and the area of ​​expensive boutiques, you will see another Bombay before your eyes.

It is here, in the famous Bombay chauli , that most of the city’s workers live. Dirty, shabby houses, deprived of elementary amenities – even to get water, you often have to go outside, to the columns – where whole families live in a tiny room (mostly unfurnished). My Instagram was horrified by these pictures of Bombay life, but what can you do – just vi.

I don’t remember whether I told you or not, but I have some kind of inexplicable craving for the markets – it is there that I feel the atmosphere of the city and can wander for hours. Therefore, our path lies on the Crawford market, the largest in Bombay, almost in the very center of the city.

Some one and a half hundred years ago Kipling himself walked here (who wrote Mowgli, remember?). As a child, he lived with his parents nearby. I even wrote about him in my memoirs:

“… golden and purple fruits surrounded me from all sides: from shoulder level and higher – somewhere high up”, “… this is the memory of those morning walks in the Bombay fruit market, first together with my nanny, then with my sister, after which we returned with baskets literally bursting with an abundance of vegetables and fruits. ”

Well, now we are walking here 🙂

Another place where we could not help but look is the huge open-air laundry Dhobi Gat. Whoever watched the “Slumdog Millionaire” knows what it is about. Here, from dusk to dawn, almost all Bombay linen is washed, and only men wash it, day after day, all their lives. They also live there, get married, have children and die.

Impressed by what we saw today, as well as from the Bombay electric trains 🙂 and the slums located near the laundry, we are going to the last place, which I have already heard about and where I have always secretly dreamed of visiting. The famous Chor Bazaar , the flea market of Bombay. Chor means thief, Chori – thief. It may have been a place of sale for stolen goods. And maybe not only it was :). But be that as it may, now here you can find a good collection of antiques, wood and metal products, dishes, all kinds of things for the interior …….Oops, who chooses the coolest Bollywood vintage posters and various things for tothemoonandback.ru? :))

In general, Chor-bazaar was very impressed, I would love to return there, having more time (and money :))

Well, the sunset on this day on one of the beaches of Mumbai … ..

And we have another night train, taking further and further south, this time to the ocean, to the South of Goa, to Palolem.

PS: I increasingly like to share my impressions of what I saw in the form of posts from the series one day of mine in …. Who missed, was already Bangkok and Kathmandu.

Well, we’ll see you in Palolem and Kerala very soon.