Peru was the third country in our big trip to South America. And if I never dreamed about Argentina and Bolivia and didn’t even really know what to do there, what to watch, then Peru had been included in my travel dreams for a very long time. Then, in 2009, it suddenly struck me that I really want to travel.

And on one of the forums I came across a report about Peru. There was also the Amazon, and old Cusco, and, of course, it is the mysterious city of the Incas.

Going deeper into the topic, I realized that such a trip is not yet affordable for me. But the dream of traveling had already stuck in my head – and therefore, six months later, I came to Nepal for the first time. This is how it all began sometime in 2009.

Unexpectedly for ourselves, we spent two whole months in Peru and looked into many not the most popular places.

And now we are taking a break from the active two months on the Pacific coast, in Mancora , almost on the border with Ecuador.

Of course, not all of what we saw amazed us and not every place (dish or activity) I can recommend and add to the category of lifetime experience We are, of course, a little spoiled travelers, but still I try to remove all comparisons and prejudices, entering a new country. Well, look at the world with open eyes so as not to miss anything. Well, you know what I mean 🙂 This, of course, is not always successful. But we are trying to share with you only sincere emotions and impressions.

But there are, there are disappointments.

For example, we were absolutely disappointed with Puno and the Uros Islands on Lake Titicaca. I haven’t seen such a tourist show and theater with disguises for a long time. This despite the fact that Lake Titicaca from the Bolivian side left an indelible impression. If you remember, it even made it into my top 5. I still do not understand why all tours around the country include this strange event in their programs in the form of a visit to the Uros Islands. For some reason, Colca Canyon also did not sink into the soul, as we expected, it is not bad there, of course, but nothing special.

We spent a week in Arequipa and, apart from the monastery of St. Catalina, for some reason this city also left no trace in my heart.

I did not list Huaraz and the track in the White Cordilleras as favorites – as you know, because of the rains, we had to return. Although it was he who, perhaps, would take an honorable place on my list. I can only judge by the unreal views from the window during the road and when the clouds parted for an hour or two.

Therefore, by tradition, I have chosen 8 facts, without which my picture about Peru would not be complete and so bright.

We arrived in this city late in the evening, the roads from Puno were exhausted for the whole day, but we threw our things at the hotel and went
take a look at the city with at least one peephole. And on that very first evening, I realized that he was magical. My tender feelings for him surprise me myself, because Cusco is probably one of the most touristy cities in South America. Why? Not far from here is Machu Picchu and this is a kind of starting point for exploring the Sacred Valley and trips to the lost city. 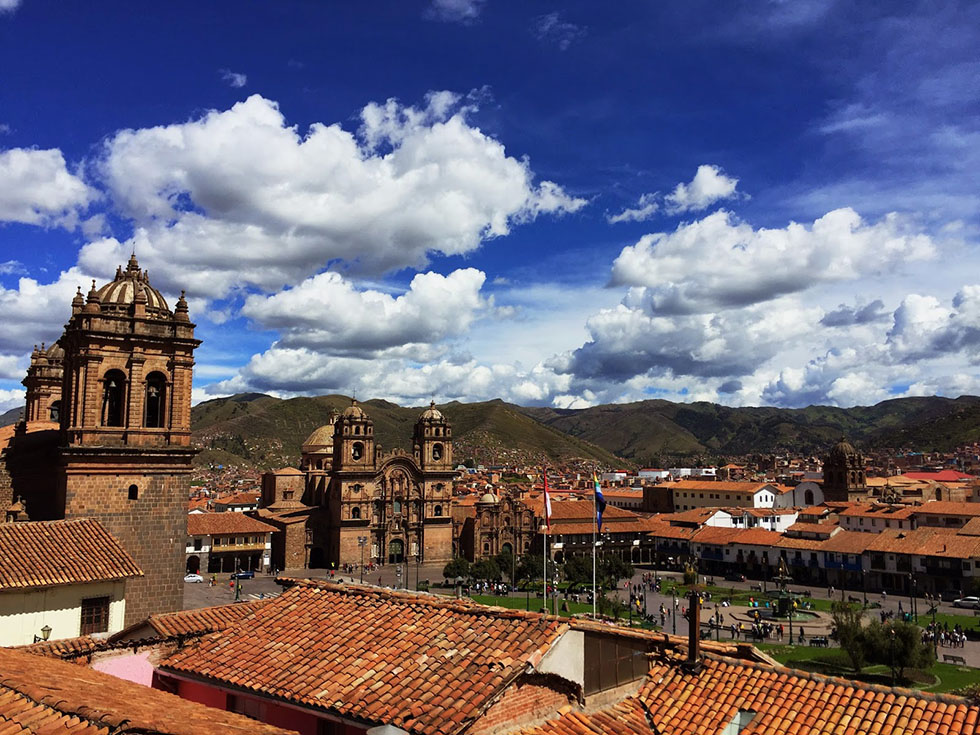 Cusco is beautiful. All these cobbled streets, up and down stairs, two-story houses, bright blue doors and stunning views of the city from the observation decks. In one of these hilltop houses in the bohemian San Blas neighborhood, we rented a room in the attic. It is located on a hill and is all cut by pedestrian cobbled streets and steps (up, of course).
It is considered a bohemian place with all kinds of creative establishments and shops. And right out of our house onto the porch, you find yourself on this Mirador San Blas. There is also a small cafe on the right with glass walls and cozy sofas. City view attached. 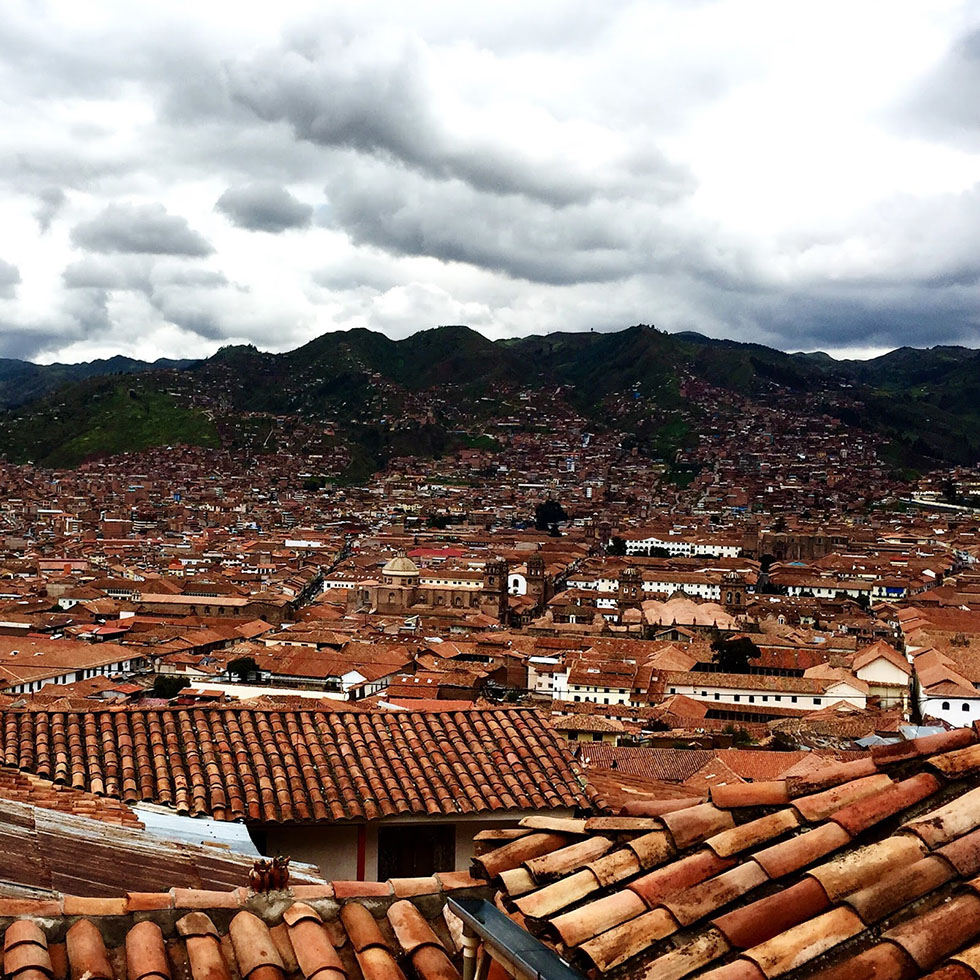 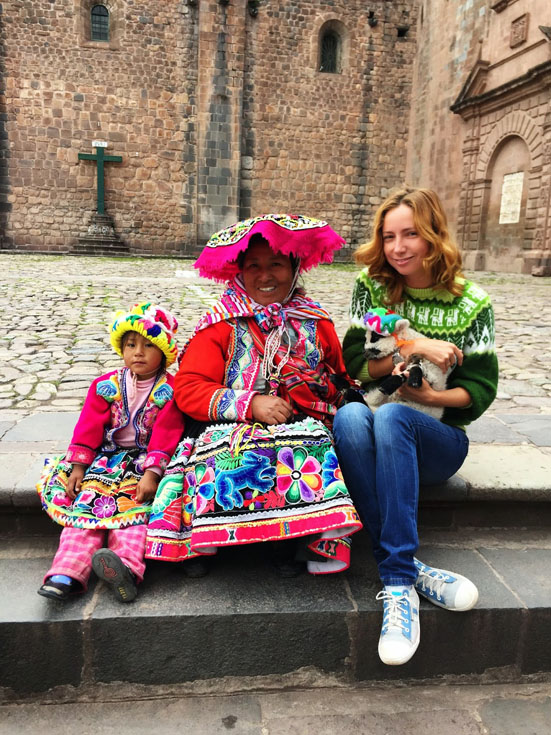 It was rainy and cool almost all the time in Cusco, but how great it is to walk around the city alone, looking for small shops of local designers and looking into a cafe for three tables for a cup of coffee – a pleasure that cannot be spoiled by anything. And Cuzco is photogenic in any weather. 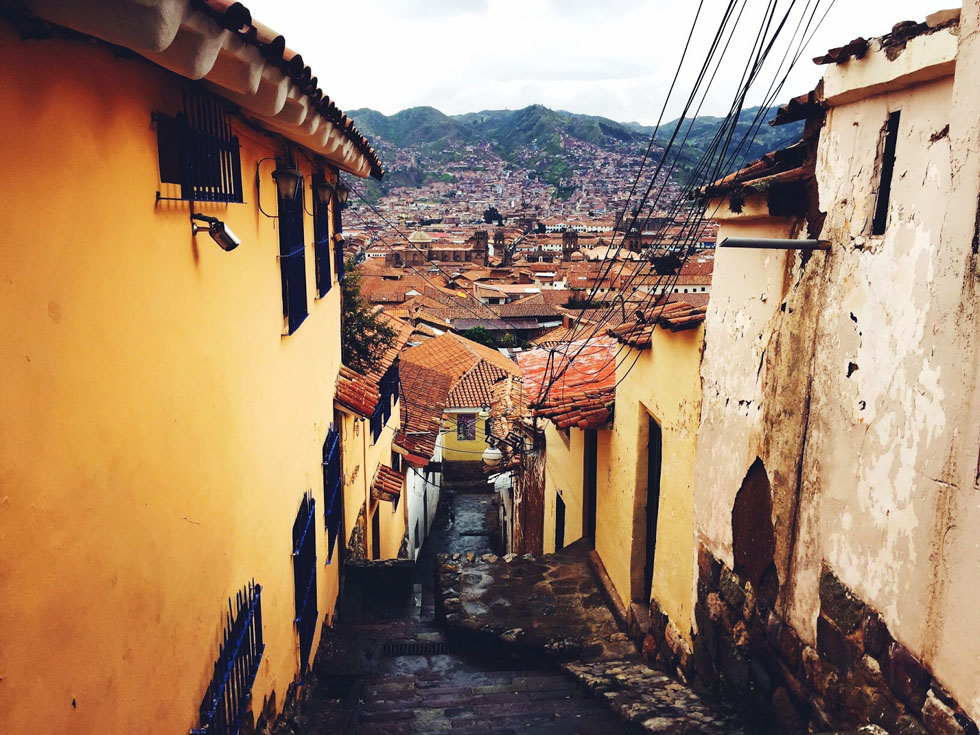 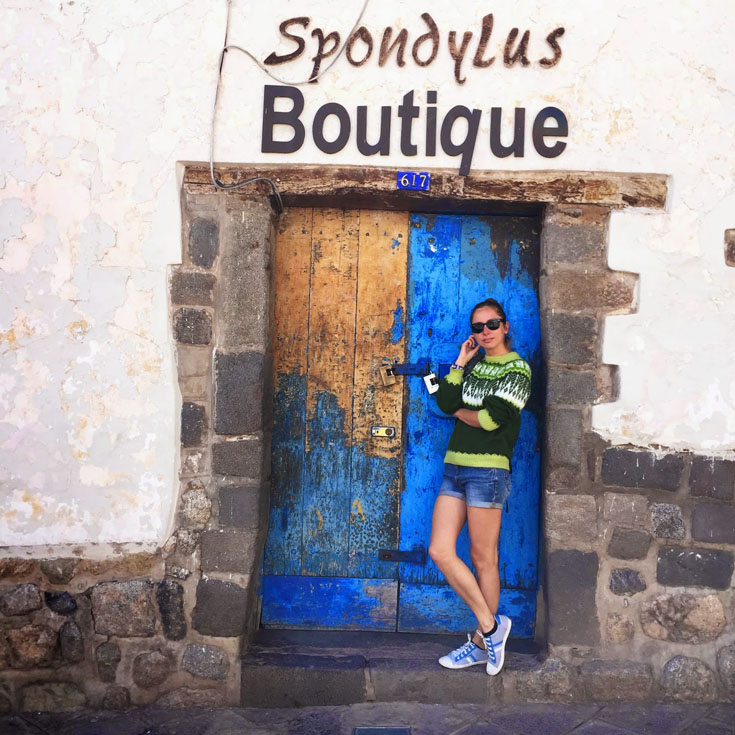 The level of hotels and restaurants is simply off scale. But don’t be alarmed, even the most budget traveler will find something to their liking. Our attic room cost us less than $ 20 with breakfast. But if you suddenly want to stay in a hotel, a former monastery or a hotel located in an old mansion – Cusco has something to offer you (from $ 100 to $ 600, depending on how much you are willing to shell out per night).

In total, we spent 10 days here. Then we left to see Machu Picchu and the Sacred Valley, then we returned. We went to Puerto Maldonado to the Amazon basin – and after a couple of days Cuzco again met us with its coolness.

By the way, this coolness is the only thing that really bothered me. It’s sooo cold in hotels. It was here that my passion for hotels, housed in colonial buildings that are 300 years old, noticeably subsided. Because it was coldest in those stone walls. But if you live in a decent expensive hotel – no problem, almost always there will be heating in the room. 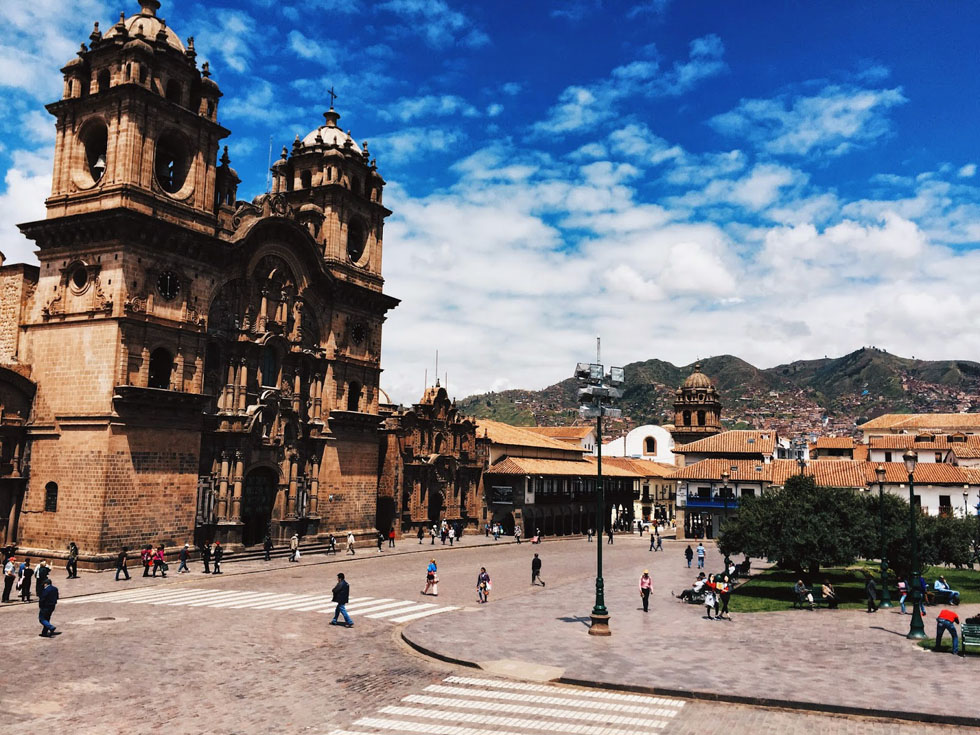 Machu Picchu was my first travel dream. And now, 6 years later, I’m still here. I meet the dawn and look at this lost city. It cannot be described in words.

In general, why am I doing this? Dreams come true, but not always right away. Therefore, this is not a reason to score and be disappointed in life.
We did not get to Aguas Calientes, a town at the foot of the mountain, on which Machu Picchu is located. I will not say that it was an easy way and, perhaps, would not recommend it. This is true for the desperate. But it was beautifully unreal. As you know, there is no road to Machu Picchu, you can only get there by train in 2-3 hours and about $ 100 one way. Or … Or drive to the small town of Santa Maria – along a terrible serpentine road in three or four hours, change to a local minibus, because the road ends and a dirt road begins over the abyss – and about another hour to the town of Santa Teresa. From there another half hour by another minibus. And then 10 km on rails through the jungle. True, you are walking – and on the left the Urubamba River is raging, such a haze hangs over the tops of the hills. And somewhere there, on one of them, the mysterious city of Machu Picchu lurked. Romance. Until it gets dark, and you are still walking on the rails. In general, you understand, the route is not for the faint of heart and impressionable.
The town itself, by the way, is very picturesque. On the shores of the raging Urubamba, between the hills, forever shrouded in fog …

The coolest thing is to get to Machu Picchu by dawn, when the city is tightly wrapped in fog. And you can’t see anything at all, and you don’t even understand, well, where is this miracle. And then gradually the fog dissipates and THIS appears before the eyes. You can look at the city for hours. I kept sitting and thinking – well, how did they manage to build it in such a place?

To be honest, I was afraid that I would be disappointed – everything has been put on stream here, and thousands of tourists every day are able to kill all the romance of even the most mysterious place. But I am delighted – nothing can spoil such beauty. Machu Picchu, as well as Taj Mahal, and Angkor Wat are definitely worth visiting.

3. Monastery of Santa Catalina in Arequipa

To be honest, when we went to the Santa Catalina monastery , we didn’t expect anything much, because they didn’t know anything about him. But he struck us – a whole city within a city, with its houses, streets, chapels … And it’s also some kind of color madness – each part of it is painted in a different color, there are blue, white, red streets.
This monastery is more than 400 years old, but only in 1970 it was opened to the public, so the spirit of the Middle Ages is in the air.

It was a matter of honor to give your daughter here – they dreamed about it, stood in line, paid unrealistic amounts of money. The wealthier the girl was, the larger her cell was – well, like a cell, a whole house of several rooms, with a kitchen and even its own servants !!! And also books, musical instruments and even musicians in the evenings. The only thing that the nuns could not do was leave the walls of the monastery. So the luxurious life in the monastery continued for 300 years, until the Pope sent a strict abbess – and she quickly closed the shop. Cozy houses were replaced with huge common rooms, and private kitchens were replaced with one large one. Now there are about 30 nuns in the monastery, but its working part is closed to the public.

There are legends about her, she is considered the very best on the entire continent. And Lima has firmly won its place as the culinary capital and, in terms of the number of restaurants of author’s cuisine, it can give odds even to the recognized monsters of the industry. All dishes with the prefix rellena completely won my heart

Causarellena. The first of the rellena. I cannot live without mashed potatoes. And causa is like a potato pie with different layers of fillings. There are a billion species. And with tuna and chicken. There is even a restaurant in Lima, specializing in causarellena, offering more than 50 variations, can you imagine?

Palta rellena – an avocado, cut in half and stuffed with everything your imagination allows. Very often these are vegetables, shrimps with a very tasty sauce.