The dream to see waterfalls has stuck in me for a long time … The prelude was a trip to northern Laos six years ago.

I heard about the waterfalls of the plateau from a cheerful and slightly drunk group of backpackers, huddled on the slobot’s quarterdeck, who was heading along the calm Mekong to Luang Prabang in October 2014 … And since then it has turned from a dream into an irresistible desire, in fact, how and any other … to places unknown to me in Southeast Asia.

Having traveled during this time the countries of almost the entire Southeast Asian region, I finally got to travel to Laos. 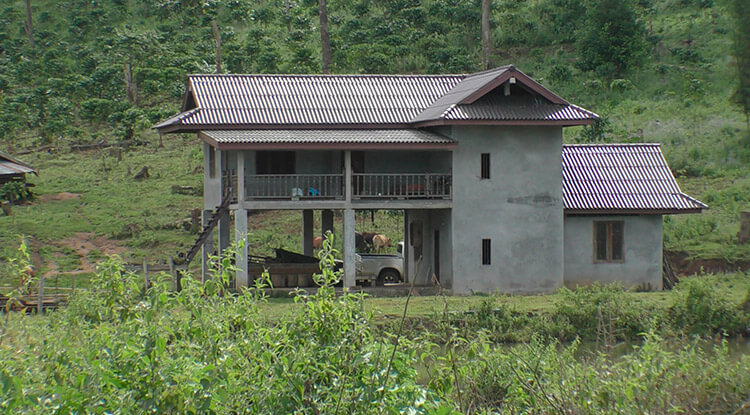 The route in Laos included: Vientiane, the tourist village of Vang Vieng and then a 13-hour drive to the capital of southern Laos, Pakse, from where it was planned to rent a scooter and go on a cruise along the plateau about 400 kilometers long.

As always, after landing in Bangkok, and most of my routes start from the city of Angels, I took the subway and flew over the city to Makkasan station – there is a connection to the underground line leading to the central railway station of the capital, Hua Lampong.

There, before checking into the guest house, I wanted to buy tickets in advance for the night reserved seat to Nong Khai, bordering Laos. The tickets cost me 900 baht. The train started three days later at 20.00 from the 5th platform. We spent three days on a visit to the shaman Ajan Kobu in Ayutthaya.

The Thai reserved seat is a rather comfortable train, clean and modernized according to the last word … Well, the Thai conductors making your bed are shocking, politely bringing heated blankets at night, because wagon split systems work conscientiously. In general, by the early morning of the next day, the train arrives at the border with Laos, and by lunchtime, overcoming the familiar procedure of filling and crossing border control, I am driving along the Friendship Bridge across the wide Mekong separating the two countries. 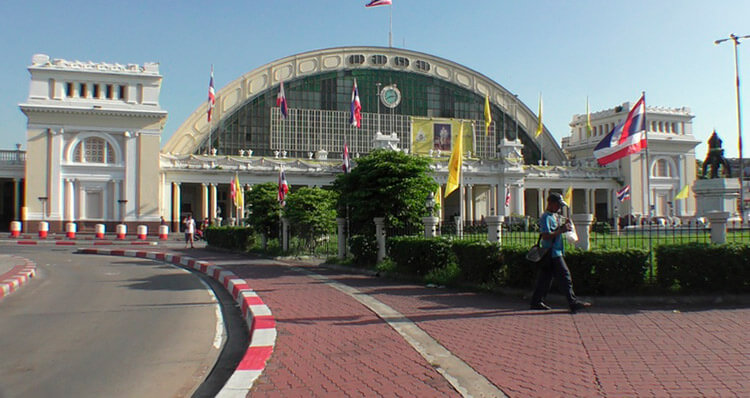 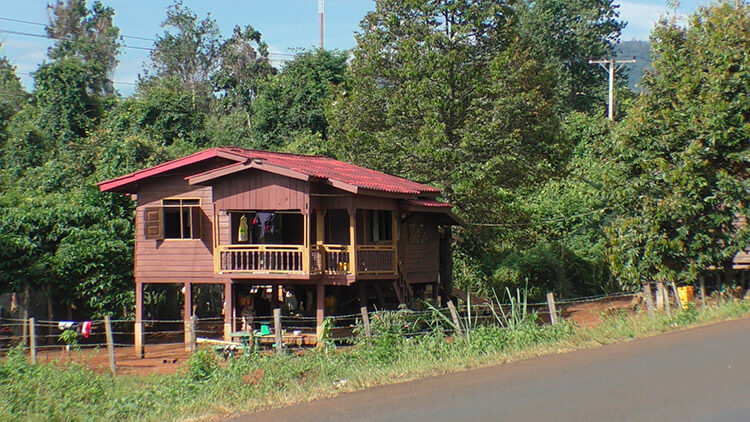 Checking into one of the many hotels in the sluggish Vientiane, I immediately rent a bike and go to see the sights, which are packed into my pedestrian Garmin.

I need to do as much as possible, I only have a day before leaving for Vang Vieng, the schedule is busy …

I note right away that a detailed description will be prioritized only directly for the section of the waterfalls of the Bolaven Plateau, since the whole route is very voluminous and requires a separate story … I will only note significant, from my point of view, moments …

After visiting the temples of Laos and the Putasai arch, I had lunch and rushed to Buddha Park 25 km from the city along the Mekong. And in the evening at the guest house, karma pushed me into one extraordinary brow – his name was Pavel, and as it turned out, he was a fairly well-known guide to Laos and Myanmar in the Russian-speaking space. We chatted until morning and agreed to meet in Vang Vieng every other day. He left earlier in some kind of jalopy, bought for a cheap price the day before. 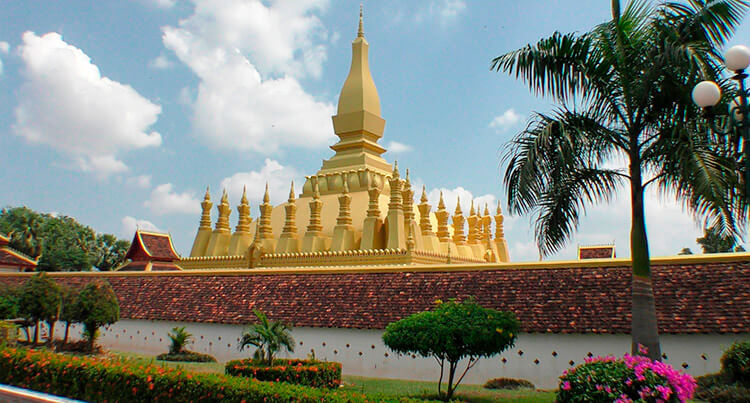 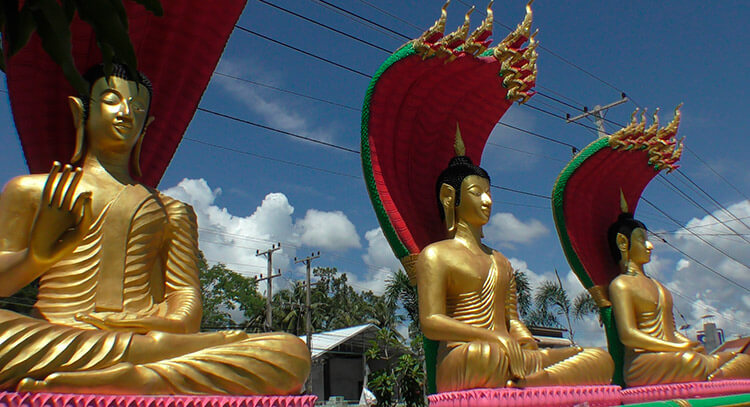 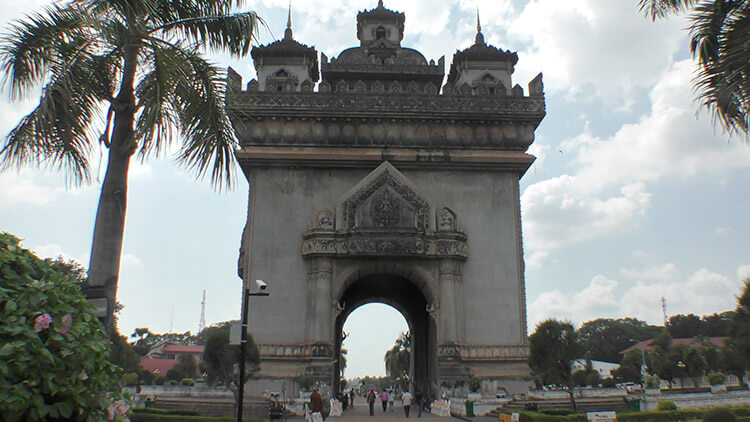 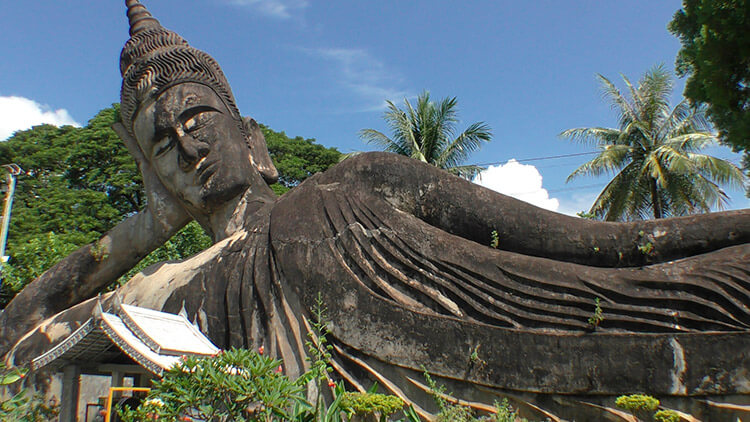 In the morning of the next day, a mini-bass picked me up from the guest house, and four hours later, bypassing the mountain serpentines, I drove up to Vang Vieng …

What to say about Vang Vieng?!

It is worth visiting here at least once, it is a very beautiful place! It amazes with its uniqueness and primitive novelty!

Having visited everything that is possible to go around on a bike and climb the local hills, I bought a ticket to Vang Vieng-Vientiane-Pakse and after 3 days, in the morning I went to the next point of my trip. 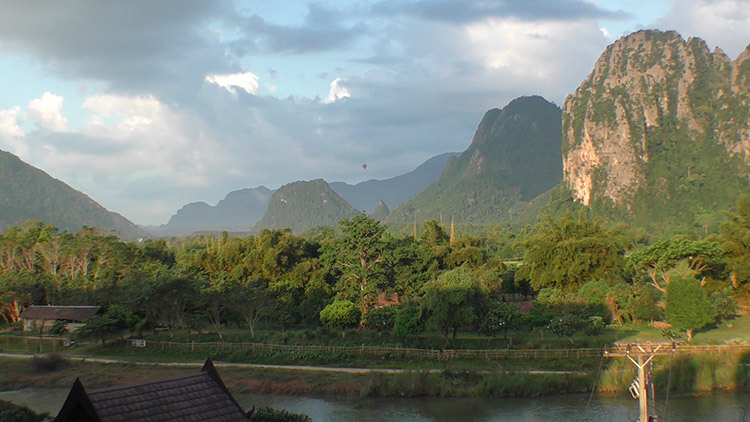 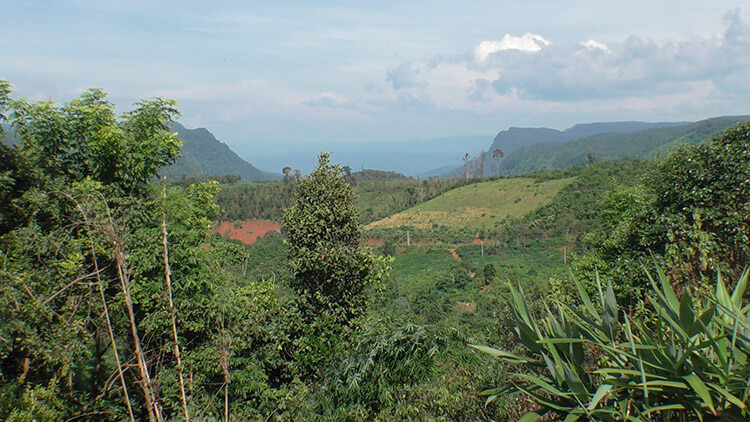 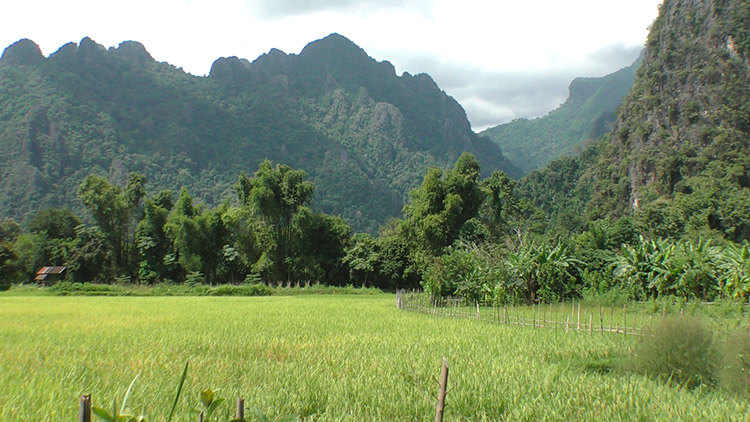 The path from Vientiane to Pakse was rather painless … Waking up at 5 o’clock in the morning and finding that my neighbors got off somewhere at night, I, lounging on the second floor of a slip-bass, settled down by the huge windshield and began to absorb the sights.

In Pakse, we drove into the midst of lunchtime … I had to take a tuker and go to the center to the street where the main bike rental offices were located.

In short, thanks to the Asian red tape, slowness and bureaucracy, I started two hours later, and after leaving the city (about 10 kilometers later) I saw a sign of arrival at the first waterfall.

To say that this spectacle bewitches, hypnotizes, leads to a stupor is to say nothing … You can look at water and fire for a long time. To the waterfalls of Bolavena – ENDLESS!

After the first waterfall in Laos, I decided to stop by the local coffee plantation. The small town of Paxong – a magnificent variety of Robusta is grown here (the plateau climate helps) … And here you can buy and take a sample.

On the first day I drove around 10 waterfalls and after 200 km I was exhausted. It was getting dark and it was necessary to look for housing, but it was not a “BOOKING.com” coverage area, so a search on the Internet did not give anything …

Apparently BUDDHA took pity on a tired Russian backpacker on a whistling bearing Japanese moped and … at the entrance to another village, an advertisement for a local guest house (unreported on the World Wide Web) was drawn.

I drove into a wide courtyard and immediately took off my backpack, which corrected my posture so much that I spent the rest of the evening with my shoulders twisted back …

I was so tired that sleep overcame hunger, and having taken a “Lao shower” instantly fell into nirvana.

The departure was early … I said goodbye to the owners and went slowly along the route, which had already rounded out to the northern border of the plateau. There along the way, there were several more cascading waterfalls, but not as big as the previous ones, but also memorable!

In the morning, the villages came to life, students in national uniforms and pioneer ties hurried to schools. The peasants were harvesting rice …

And everyone without exception stared at me like a miracle … And if I had to make stops, then I turned into a museum piece.

When I got to Pakse, I handed over the moped and went to look for the bus station from which it was possible to get to Bangkok. The trip cost me 950 baht and 15 hours of travel with a restless secret in the neighborhood. In short, I arrived in Tai at 4 o’clock in the morning at the Mochit bus station, completely killed and, having reached the first metro to the hotel, in the Ratchatevi area, I fell asleep.

Then there was a week-long stay in his native Bangkok, but that’s another story …