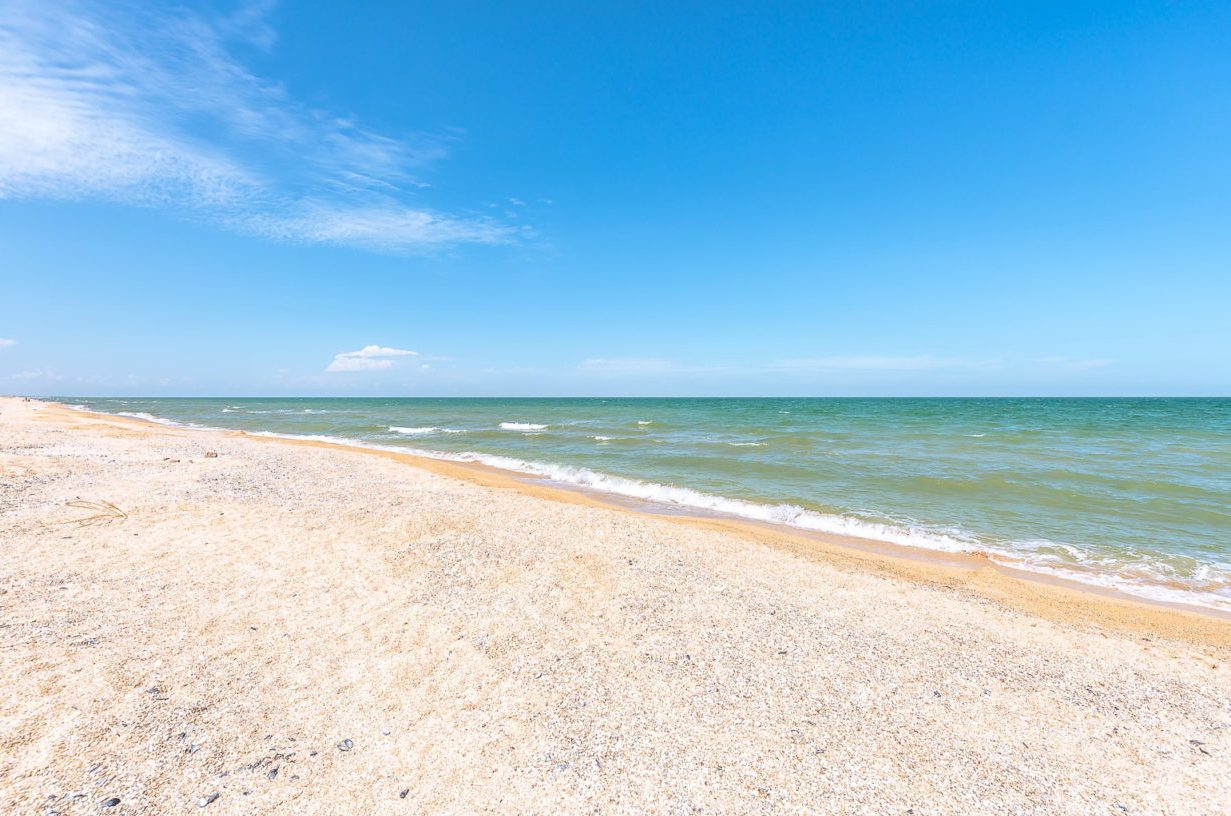 Families with children traditionally make up the lion’s share of those who, with the onset of warmth, rush to the sea. Which is not surprising: any child, regardless of age, needs rest, recovery, change of scenery and new impressions. And the coast of the Azov Sea with its warm shallow sea, spacious sandy beaches and ecological purity is the best place for this. At the same time, most parents prefer small resorts with a calm atmosphere.

We present five of the quietest and most secluded Azov resorts, ideal for a relaxing holiday with children. 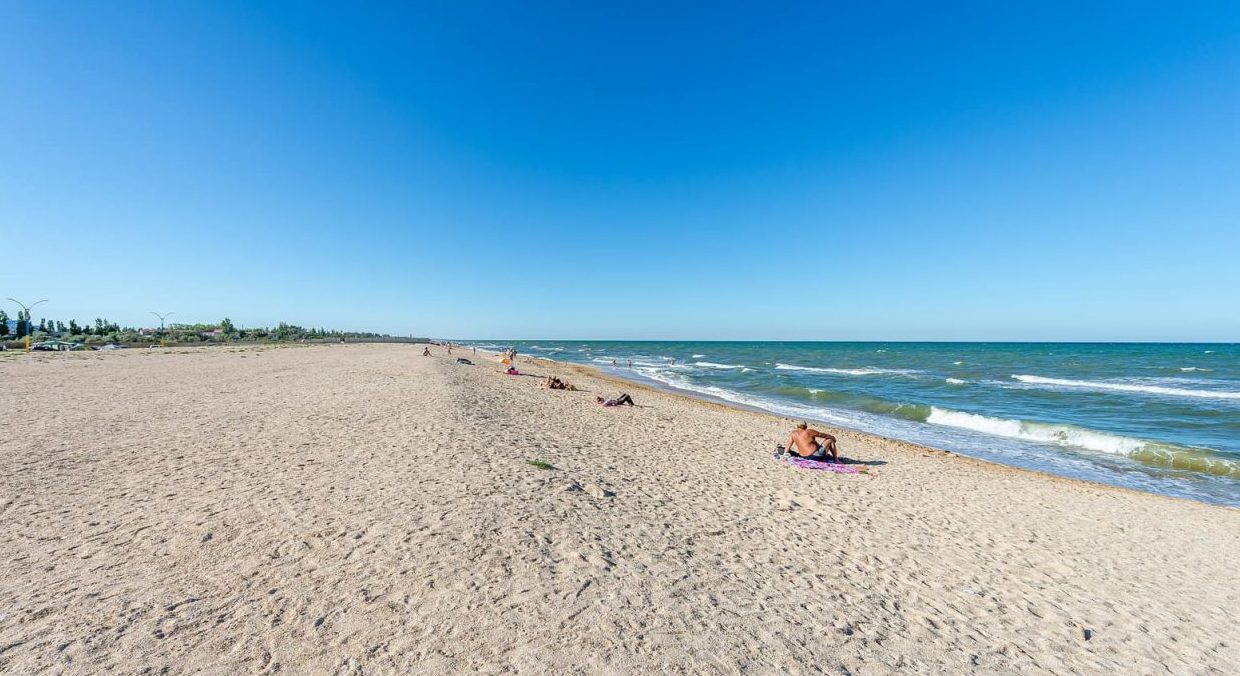 Shooting is a small village on Arabatskaya Strelka , the most distant from the mainland. It is located far from industrial enterprises, major highways and railways, which provides it with a favorable environmental situation.

The Sea of ​​Azov in Strelkovoye is not as shallow as in neighboring Gengorka or Genichesk, where the 50-centimeter depth remains for almost a hundred meters from the coast. But here there is also a strip of warm shallow water – it is narrower than in other villages of Arabatki, but it is enough for safe bathing of babies. The latter also love to splash in the paddling pools that often form on the shore after storms.

The beaches in Strelkovoye are made of fine light sand, closer to the surf line there are areas with small and large shells. They are always free: it is relatively crowded only on the beaches adjacent to the territories of recreation centers and boarding houses. So there is plenty of space for children. True, they are also free from the beach infrastructure, so you will have to take an umbrella or a small awning with you to provide your child with shade.

As for leisure and entertainment, kids often have enough playing with sand on the beach, playgrounds on the territory of the base and near the building of the village council, but this will not be enough for older children. They may be interested in a trip to the Safari-Park zoo in the neighboring village of Schastlivtsevo. If you wish, you can take your children to Gengorka, where there is a water park and a dolphinarium.

There are no nightclubs and discos, cafes and bars buzzing until late in the village, which provides the silence here necessary for a relaxing holiday with children, especially small ones. 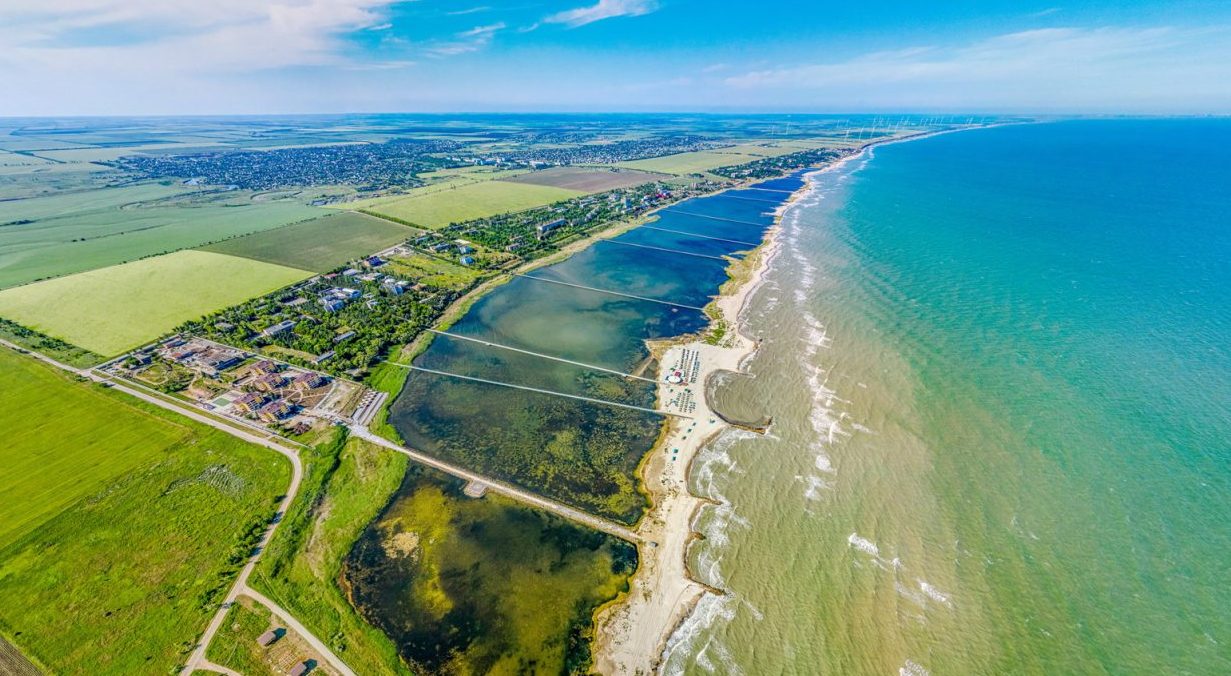 Primorsk is a quiet town in the south of the Zaporozhye region, famous for being an inexpensive family resort. The city itself is located one and a half kilometers from the sea, so it is better to choose accommodation for families with children directly in the resort area, which stretches parallel to the sea coast. Moreover, it is here that the bulk of tourist accommodation is concentrated: recreation centers of the old and new types, boarding houses, hotels.

A feature of Primorsk is the estuaries, which cross the coast almost along its entire length, blocking the road to the sea. Wooden bridges are thrown across them, along which vacationers go to the beach. For parents with children, such a passage will not be a problem: there are ramps and slopes for strollers on all bridges. But if you want to have direct access to the beach and not bore your child with a 10-minute journey, you should look for housing in the Yasnaya Polyana area.

The sea in Primorsk has a depth that is comfortable and safe for children – within a few meters from the shore it does not exceed 60 cm – and it warms up well. The beaches are sandy with a small admixture of small shells, spacious, with a gentle entrance to the water. And what is important, they are usually not overwhelmed even in the high season, so that the child can freely run and play with the sand in front of their parents, without disturbing other vacationers.

Sheds, fungi and umbrella rental points are not available on all seaside beaches – more or less equipped areas related to recreation centers and boarding houses, as well as the central beach. So you will most likely have to take care of your baby’s sun protection yourself.

There will be no problems with food for a child on vacation in Primorsk: it is easy to find an accommodation option with three meals a day or the ability to cook on your own, buying food in stores and markets. But it will be more difficult to keep the baby busy: unlike the more promoted neighbors – Kirillovka and Berdyansk – there is practically no entertainment in Primorsk. They are limited to traditional beach attractions and playgrounds on the territory of recreation centers and boarding houses.

Urzuf is a resort village in Donetsk region, popular among vacationers with children, for whom there are optimal conditions here. The Azov Sea is clean here with a shallow water zone characteristic of the entire coast, comfortable and safe for kids, and a smoothly increasing depth. The water near the coast warms up quickly, sometimes even too much, as a result of which the sea begins to “bloom”. But this is not a problem: many bases and hotels here have swimming pools, including children’s ones, which can become a temporary alternative to the sea.

Unlike a number of other Azov resorts, for example, Stepanovka Pervaya with its clay cliffs, the coast in Urzuf is mostly flat. Although there are areas where the slope is steep, and you need to go down to the beach by stairs. Local beaches are wide and spacious, covered with sand interspersed with small seashells. Among them there are landscaped ones with stationary awnings, sun umbrellas, changing cabins – they are usually crowded and less clean. And there are unequipped ones, where comfort will have to be provided on their own, but the reward will be the absence of crowds and garbage necessary for rest with a child. These are worth looking for further from the center. 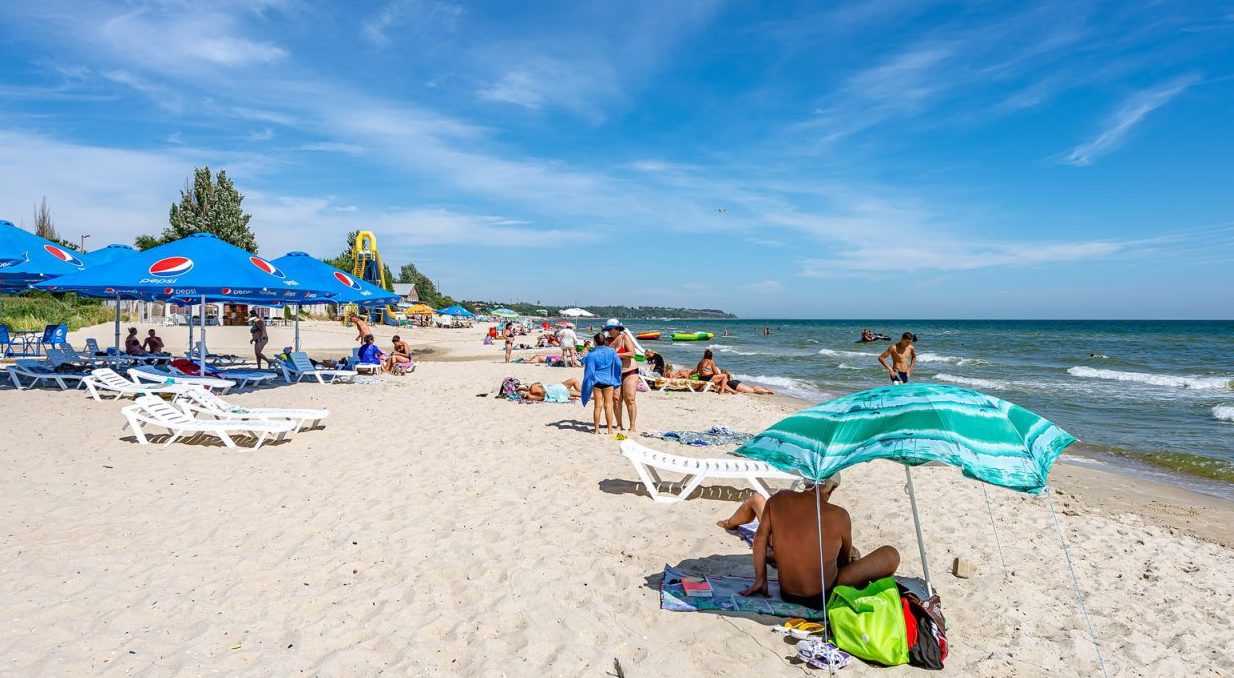 Urzuf, although a small resort, is the most popular in the region. Therefore, during the peak season it can be crowded and noisy, especially since the village has discos and bars that work until the morning. But this applies mainly to the center. If you choose housing away from it, literally one or two streets further, peace and privacy are guaranteed. When choosing an accommodation option with children, you should also pay attention to its remoteness from the sea: Urzuf is a large village, and the road to the beach can take up to half an hour on foot, which will be tiresome for a child.

Entertainment for children is better here than in neighboring resort villages. There is an amusement park and a small zoo in the center, on the territory of most of the bases and hotels there are playgrounds and playrooms, and some, for example, the Azov and Urzuf boarding houses, offer animation services. With older children, you can go on an excursion to the natural park “Meotida” to see animals and birds in their natural habitat. 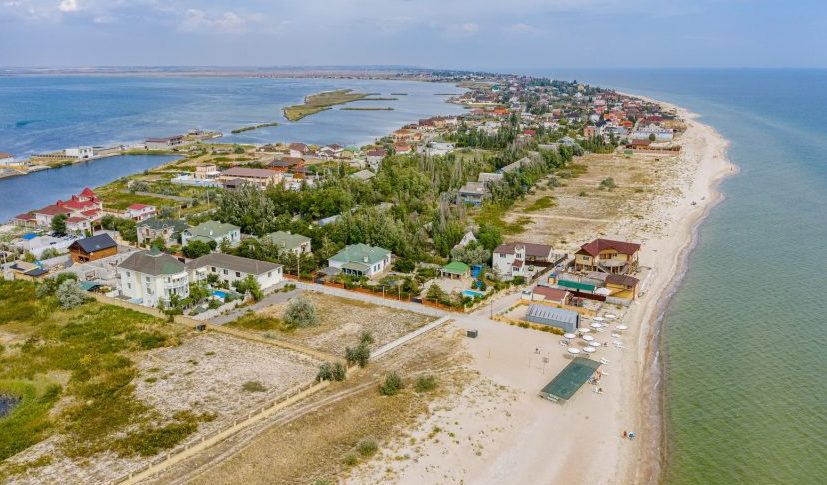 Belosarayskaya spit is a village in the Donetsk region, located on the spit of the same name, washed by the Taganrog and Belosaraisky bays of the Azov Sea. It is not yet in such demand as its neighbors along the coast, Kirillovka and Berdyansk, and therefore it is free from an excessive influx of tourists and retains the atmosphere of a quiet, cozy place, suitable for a measured holiday with children.

The beaches on the spit are covered with soft golden sand and are mostly spacious, so kids can run freely, frolic and build sand castles. Only the central beach can be crowded during high season, but there are always alternatives to it.

Basically, the beaches of the Belosarayskaya Spit are not equipped, the minimum infrastructure in the form of awnings, changing rooms, rental of umbrellas and sun loungers is present next to recreation centers, hotels and boarding houses on the first line. These beaches are usually cleaned regularly, which cannot be said about municipal beaches.

The depth of the sea near the shores of the spit is comfortable for children: for several meters it does not exceed a meter and a half. For the same reason, the water warms up well, by the end of July it resembles fresh milk. The entrance to the sea is shallow, the bottom is folded with soft sand.

As in Urzuf, the beaches of the Belosarayskaya Spit offer traditional fun in the form of inflatable water slides, trampolines, banana rides and catamaran rides. In the village itself there is an amusement park with attractions for children of different ages, next to which there is a municipal playground with sandpits, swings and slides. Playgrounds and rooms for games are also available at the bases, in guest houses and hotels. You can diversify your child’s leisure time with an excursion to the ornithological reserve located at the base of the spit.

There will be no problems with the choice of accommodation for a vacation with a child. In addition, the size of the spit is such that wherever you are located, the road to the sea will take no more than 10 minutes. 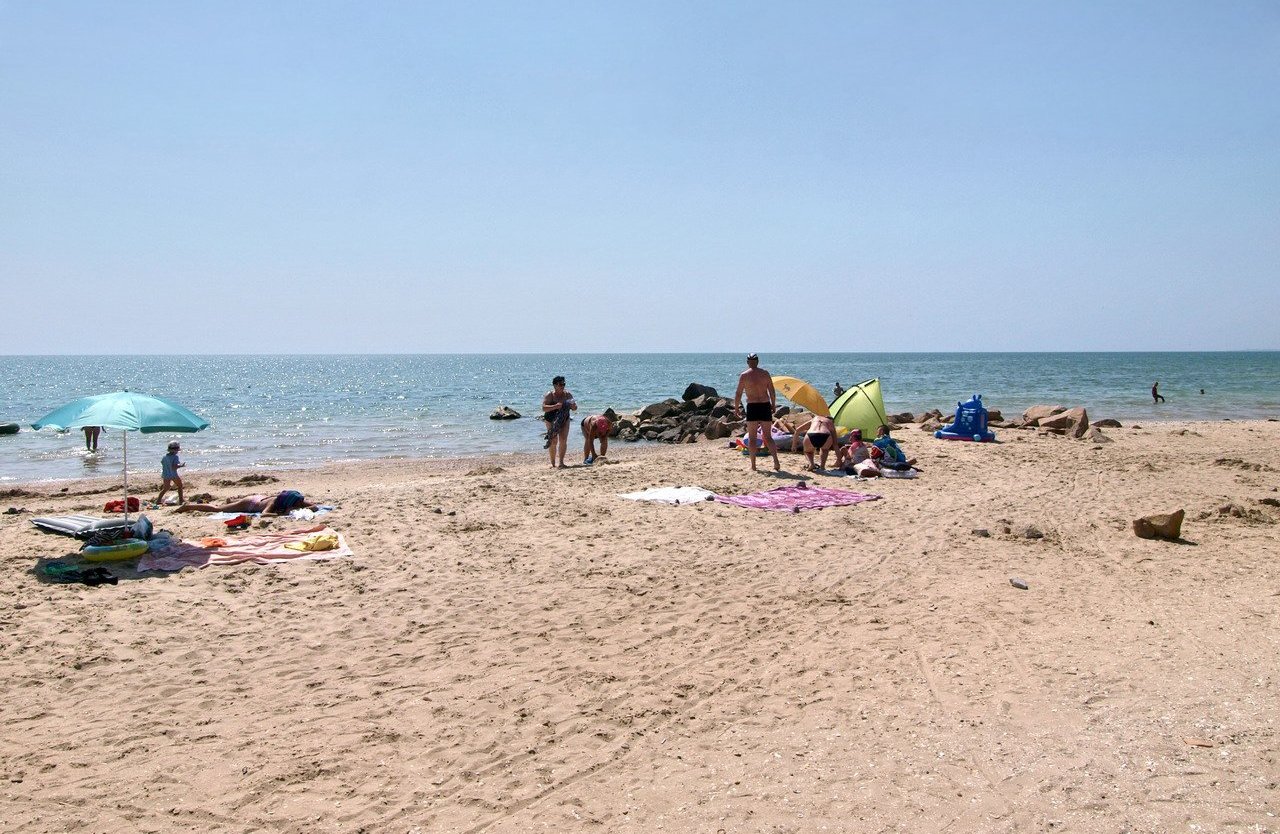 Stepanovka Pervaya is another small resort village located on the coast of the Azov Sea in the Zaporozhye region. It is adjacent to Kirillovka, but unlike it, it is in demand mainly among fans of a quiet beach holiday, especially among families with children who value peace and quiet.

Stepanovka has one feature that distinguishes it from most of its “relatives” along the Azov coast – Berdyansk, Primorsk, Arabatskaya Strelka and others. These are clay cliffs that run parallel to the sea, blocking the path to the beaches. And although there are slopes in most of them, vacationers with children often prefer the beaches in the Molochny estuary area and in the center of the village, where the coast is gentle.

Because of the same steep slopes, the beaches of Stepanovka Pervaya are not as wide as in Urzuf, Primorsk or Strelkovoye, but given the small number of tourists, they remain free and clean. Village beaches are sandy-shell, without sheds and other infrastructure. Some amenities – sun umbrellas, sun loungers – can only be counted on near hotels, bases and boarding houses located on the shore.

The sea off the coast of Stepanovka with extended shallow water and gradually increasing depth. In the middle of summer, the water temperature near the coast reaches +26 ° C. The set of entertainment is typical for resort villages: inflatable slides, “bananas”, “buns” and catamarans. The bases have playgrounds for children. If you want to diversify your measured vacation, you can go to Kirillovka with entertainment for every taste and age: a water park, a dolphinarium, an amusement park, an aquarium, an equestrian circus, etc.

Stepanovka Pervaya offers a good selection of resort housing: in addition to the old recreation centers, there are modern boarding houses, mini-hotels and guest complexes with all amenities, located within walking distance from the sea.

You can organize your child’s meals in a café on-site or cook on your own using products purchased at the local market and in stores where prices are, on average, a third higher than in the city.

Thus, despite the popularity of the Azov recreation and the large tourist flow, which is growing in some directions from year to year, there are still quiet places on the coast. Good natural data, the absence of large entertainment facilities and the reigning tranquility create optimal conditions for families with children.

The post was prepared jointly with the editors of NIAP “Kirillovka.Ukr”.

Likes and comments are welcome 🙂