Petersburg is good because some of the sights from the mandatory tourist program can be viewed free of charge. And it’s not even about canals, monuments and 22 thousand old houses, which are compactly located in the city center. There are several iconic places that you can visit without spending a single ruble.

The fortification on the Hare Island was laid by Peter I himself back in 1703. Now on the territory of the fortress there are the Mint, the Peter and Paul Cathedral, where members of the imperial family are buried, and several museums telling about the history of St. Petersburg and the country.

The entrance to the museums is paid, but you can walk freely around the fortress. It is better to arrive at 12 o’clock, when a cannon fires from the wall of the Naryshkin bastion, making a “midday shot”. This practice was introduced by the commander of the Black Sea Fleet, Admiral Greig, in 1819: a gun shot at exactly noon helped to synchronize clocks on ships, and St. Petersburg joined this tradition in 1865.

If you arrive a little earlier, then take a look at the only sandy beach in the area, which is located behind the wall of the fortress here, on the Hare Island. You cannot swim there, so locals come to sunbathe or have a snack near the water overlooking the Hermitage.

Summer Garden and Field of Mars 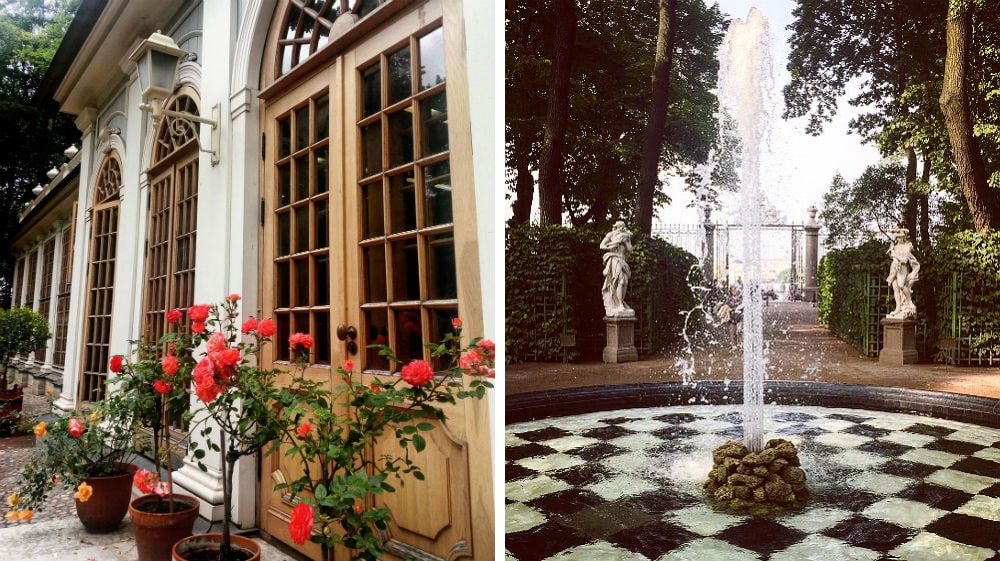 In fine weather, it is pleasant to walk in the shade of trees and look at sculptures in the Summer Garden. For three hundred years, real works of Italian masters of the 17th-18th centuries stood in the park, but in 2011 they were sent for restoration and replaced with exact copies. Now the originals are in the Engineering Castle in St. Petersburg.

After passing through the Summer Garden, you will find yourself near Chizhik-Pyzhik on the Fontanka embankment. This is the smallest monument in St. Petersburg. There are always several people standing next to him. Everyone tries to hit the platform with a coin in such a way that it remains lying and does not fall into the water. They say this trick makes wishes come true.

A few meters from the bronze bird there is one of the most beautiful squares in St. Petersburg called the Field of Mars. In the center of the square there is an eternal flame and a memorial in memory of the victims of the February 1917 revolution.

Palace Square and the Hermitage 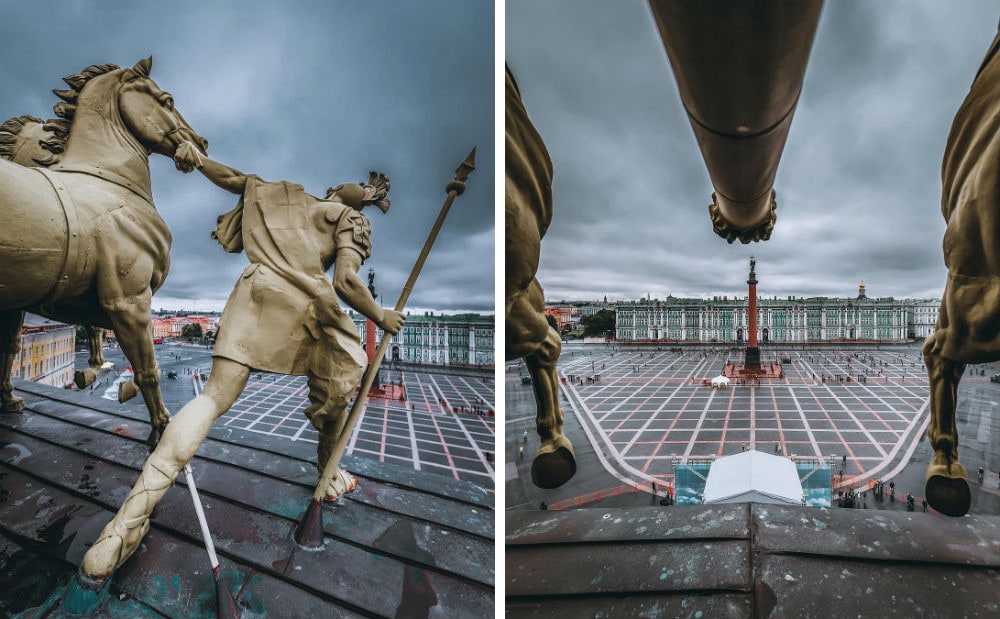 Palace Square is the main square of St. Petersburg. On holidays, solemn concerts and parades are held here. On ordinary days, the invariable attribute of the square is harnessed carriages, a couple of street musicians and Peter and Yekaterina’s doubles, who persistently invite tourists to take pictures.

In the center of the square stands the Alexander Column, erected in 1834 in memory of the victory over Napoleon. It is the tallest solid granite monument in the world.

The square is separated from the Neva by the Hermitage – one of the largest museums in the world. On the first Thursday of the month, you can view its exposition free of charge, for this you need to take a ticket at the box office before 17:00. 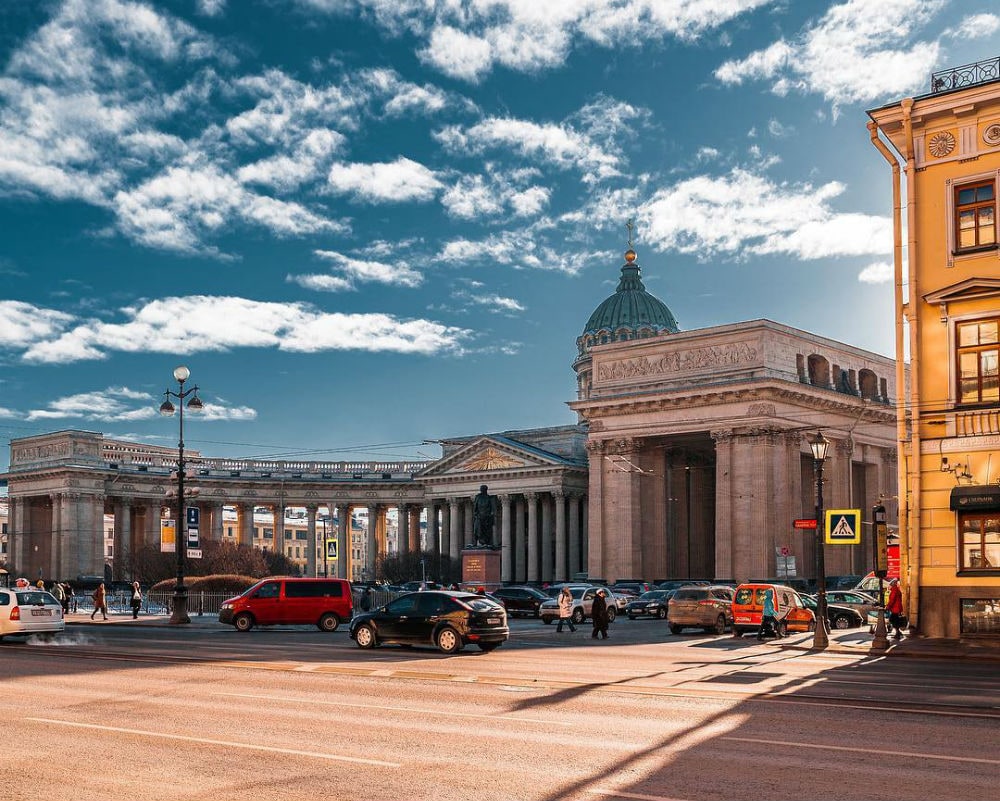 Kazansky is a functioning cathedral in St. Petersburg, so admission is free. The church houses an Orthodox shrine – the Kazan Icon of the Mother of God and buried Mikhail Illarionovich Kutuzov – the commander-in-chief of the Russian army during the Patriotic War of 1812.

The construction of the temple was started by Emperor Paul I, according to his idea, the cathedral was supposed to resemble St. Peter’s in the Vatican, which is why the facade of the building is decorated with a colonnade of 94 columns. 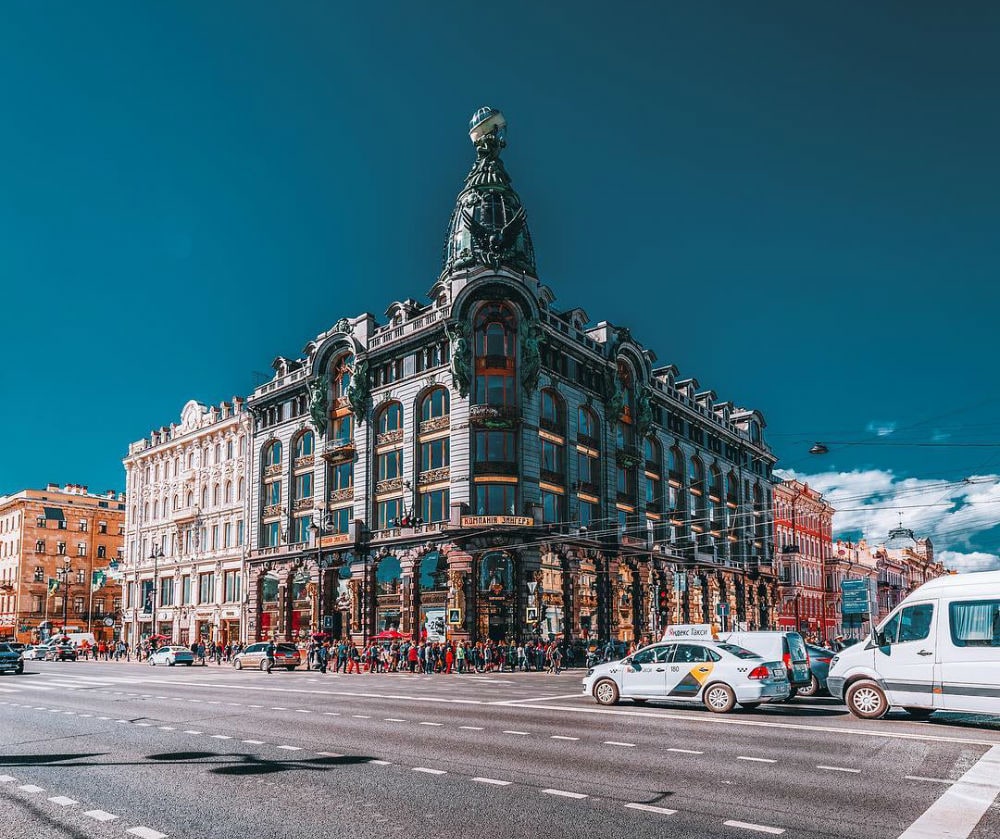 Opposite the Kazan Cathedral is the house of the Singer company, better known as the House of Books, on the roof of which a dome is installed, illuminated in different colors in the evenings. This building houses the most famous and largest bookstore in St. Petersburg and one of the largest in Europe – a real paradise for a book lover. A huge number of books of all genres and trends are presented here, presentations of books by world-famous authors and author meetings are held. Also in this building is the office of the social network “VKontakte”. 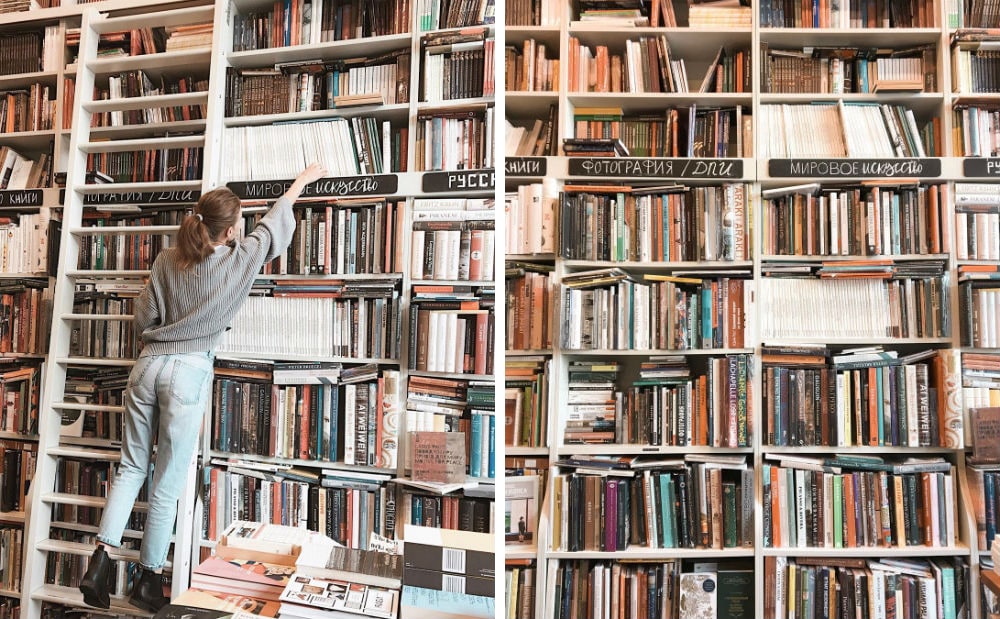 This is a family-owned, distinctive bookstore, opened in 1926. In the first years of its work, “Subscription editions” were considered a cult place among the Petersburg intelligentsia – here you could subscribe to books and magazines, which, by the way, is possible even now.

On two floors of the store, there are shelves filled to the top with books and a cozy coffee shop, where you can browse through the copy you like over a cup of coffee. In addition to books, the author’s stationery and souvenirs of our own production are presented here. 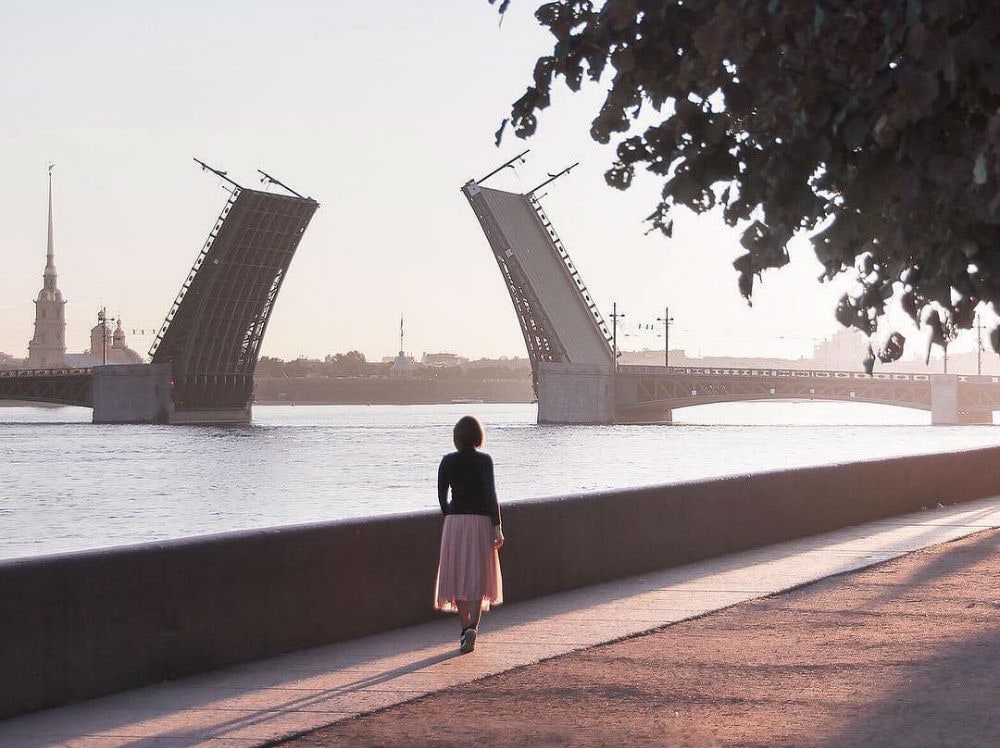 There are 342 bridges in St. Petersburg. Of these, only 13 are getting divorced, but the beauty of this action has made the main free travel show out of the usual technical process. It can be seen only during the navigation period – from early April to mid-November.

Bridges are raised so that large ships can climb the Neva to Lake Ladoga. In time, the entire show takes 8-10 minutes. The most convenient place for viewing is the Palace Embankment, since from it you can clearly see the Palace, Troitsky and Birzhevoy bridges, and in the distance Blagoveshchensky and Tuchkov loom.

New Holland is one of the coolest public spaces in St. Petersburg. For a long time, the small island was abandoned. Previously, there was a sea prison and warehouses of the Admiralty, now – trendy bars, bookstores, stylish boutiques, versatile recreation areas and an unusual playground in the form of a giant ship. Plus, free concerts, lectures and exhibitions are regularly held on the island.

Park of the 300th anniversary 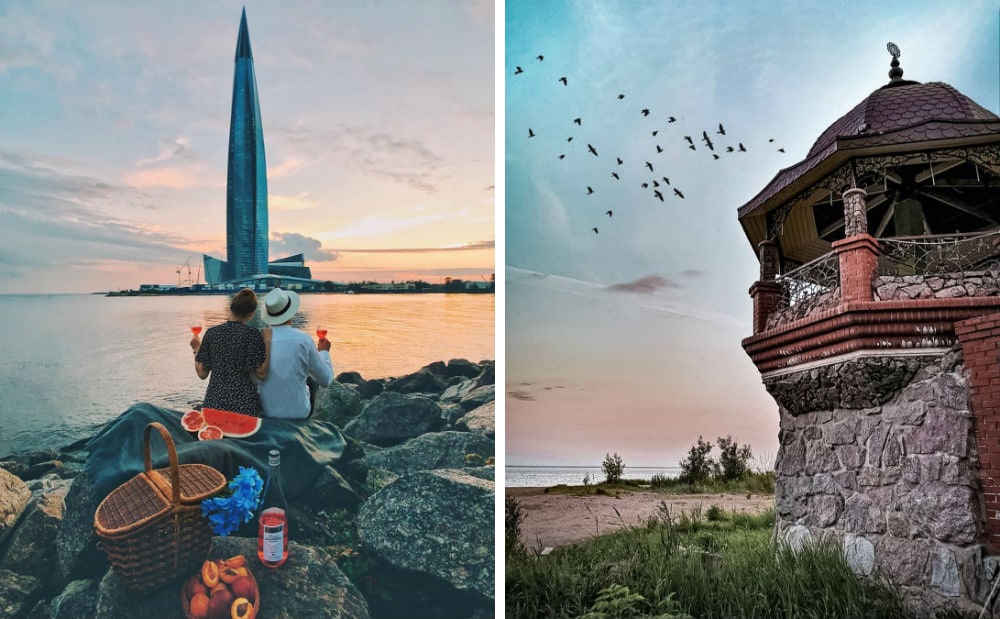 The park was opened 15 years ago for the long-awaited anniversary. It stands on the shores of the Gulf of Finland closer to the outskirts of the city, so it is more popular not with tourists, but with local residents.

The main feature of the park is a pleasant sandy beach overlooking 4 new attractions:

There are three shopping malls near the park. There you can eat and hide from the rain caught by surprise.

In the north, near the Udelnaya metro station, the largest flea market in St. Petersburg is hidden. There is so much there: from shops with tsarist coins and antique furniture to ruins with old instruments, Soviet toys and military ammunition. The length of the shopping arcade is 2 kilometers. Just for a cursory inspection, you will need about an hour.

Please Note: The flea market is open on weekends only. It is best to drop in there before 1pm, when all the merchants are in place.

Climb to the roof

The easiest option is to visit the equipped roof in the Etazhi loft project. It offers a gorgeous view of the city. There are comfortable seating areas and sometimes concerts are held on a small stage.

You can bring your food and drinks with you to the roof, so organizing a picnic in the fresh air will not be difficult. True, the entrance to the roof is paid – a symbolic 100 rubles. Sometimes you can get in freely if you buy a ticket to one of the existing exhibitions beforehand.

There is a more sophisticated way to admire the St. Petersburg rooftops. You can book a table in the cafe with a terrace. This will allow you to watch the sunset with pleasant music with a glass of wine in hand and a charming view of the old center. Here are three suitable establishments:

The institution operates on the principle of a time-cafe – the client pays for the time spent inside. It is a great place to relax and socialize. It is located near the Admiralteyskaya metro station. The anti-cafe has a small terrace overlooking Nevsky Prospekt and a traditional set of entertainment: board games, X-Box, hookah and mini-cinema.

The cafe is located in a dome on the roof of an old mansion. They serve excellent Italian coffee and chic signature desserts. In the distance, behind a series of roofs, St. Isaac’s Cathedral is visible.

A cozy Italian restaurant is located right on the roof of the business center near Sportivnaya metro station. Visitors will find excellent pasta and a panoramic view of the city. Best of all, you will be able to see the nearest sights: the bell tower of the Prince Vladimir Cathedral and the Petrovsky stadium.