Once the capital city of North-Eastern Russia, modern Vladimir still preserves the spirit of antiquity, is proud of the heritage of white-stone architecture and is rightfully considered an ideal place to spend a weekend in silence and solitude. Residents of neighboring megacities – Moscow and Nizhny Novgorod – especially appreciate the city’s comfort and leisureliness. Nowadays, pedestrian and cycling infrastructure is actively developing here. And in its central part, small private museum workers are endlessly opening up, striving to compete with one of the most powerful state museum complexes in Russia – the Vladimir-Suzdal Museum-Reserve.

It will be interesting to spend a weekend in Vladimir for residents of Moscow, Yaroslavl, Nizhny Novgorod, Ivanovo, Kostroma, Ryazan, Tula, Kaluga, Voronezh, Tver, Kazan and other nearby cities, the road from which will not take long.

You should start exploring Vladimir from the Golden Gate – a unique architectural monument and a symbol of an ancient defensive structure. It was the Golden Gate that in the past made out the entrance to the city and served as reliable protection from enemies. The gate is called “golden” for a reason – once they were upholstered with sheets of gilded copper that shone brightly in the sun. In addition to the front ones, the city had six other gates: Copper, Orinin, Silver, Ivanovskie, Torgovye and Volzhskie – all of them have not survived.

Forming a single fortification, from the north and south, bulk ramparts adjoined the Golden Gate. The remainder of such a defensive rampart, which was later named Kozlov, has survived to this day. Climbing to its top, you can see the entire central part of the city from a bird’s eye view. 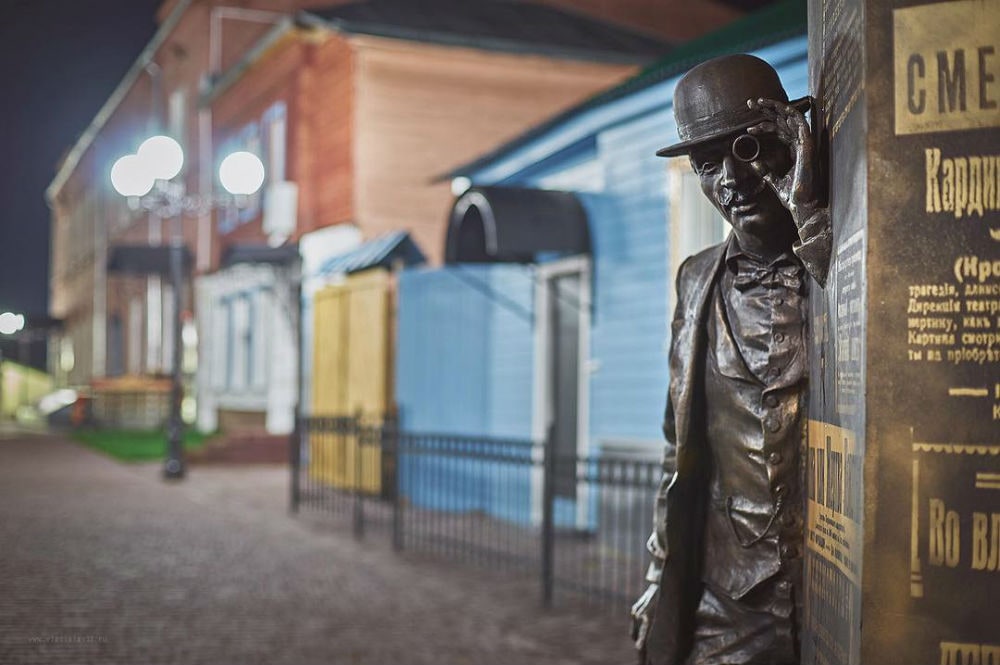 The renovated pedestrian zone on Georgievskaya Street, a favorite place for city dwellers and tourists to walk, stretches along the main thoroughfare of the regional center.

The undisputed favorite and participant of endless selfies among the recently installed bronze sculptures is a monument to a spy (an agent of the Criminal Investigation Police), who, from behind a billboard, is following the actions of a young prankster. If you get here on a hot day, you can douse yourself and your friends with an antique hand-held fire cannon held by a bronze firefighter.

In the warm season, in one of the courtyards you can also find “Shalopaevka” – a gathering place for local antiques: this is how the old city flea market, located on the outskirts of the central city street, was once called.

Where is it: Pedestrian walk starts from the Old Pharmacy and ends at the Water Tower (Museum “Old Vladimir”). 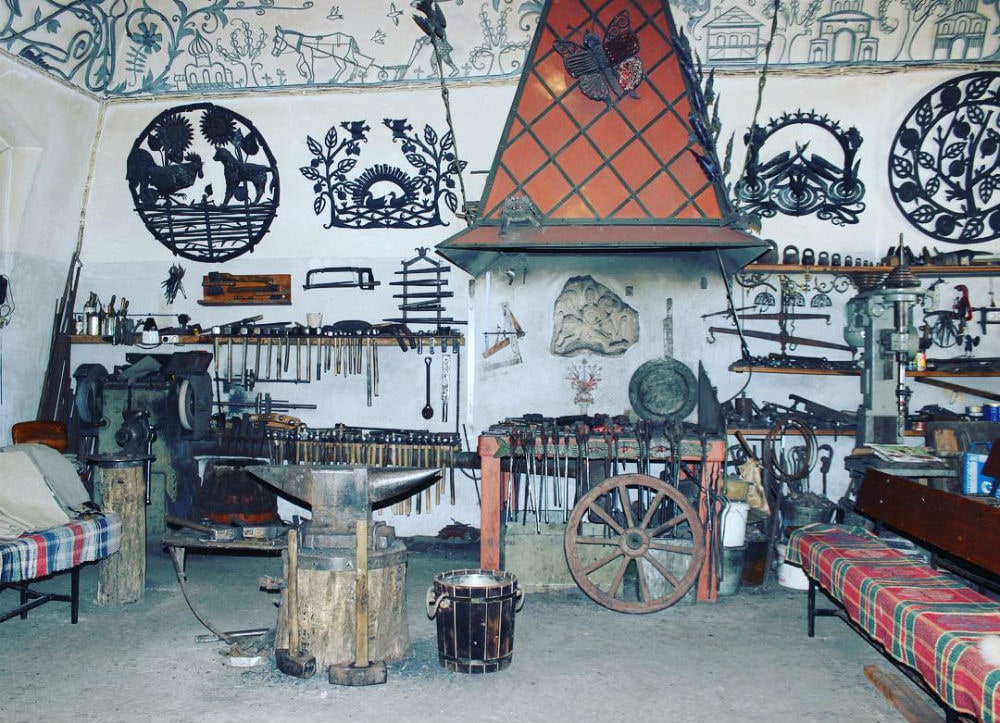 In the creative workshop of hereditary blacksmiths, you can see an exhibition of arts and crafts and learn about the history of blacksmithing. And for a short while, turn into a real master, working on few where preserved ancient technologies, – feel the heat of the furnace, see how the ductile red-hot metal melts in the fire, turning in your hands into unique elegant souvenirs. This is why many visitors come here.

The Borodin Forge is located in the very center of the city – on Georgievskaya Street, right behind the Old Pharmacy. A small building is immediately recognizable – a beautiful wrought-iron fence and exterior details will not allow you to pass by.

Cathedral of the Assumption 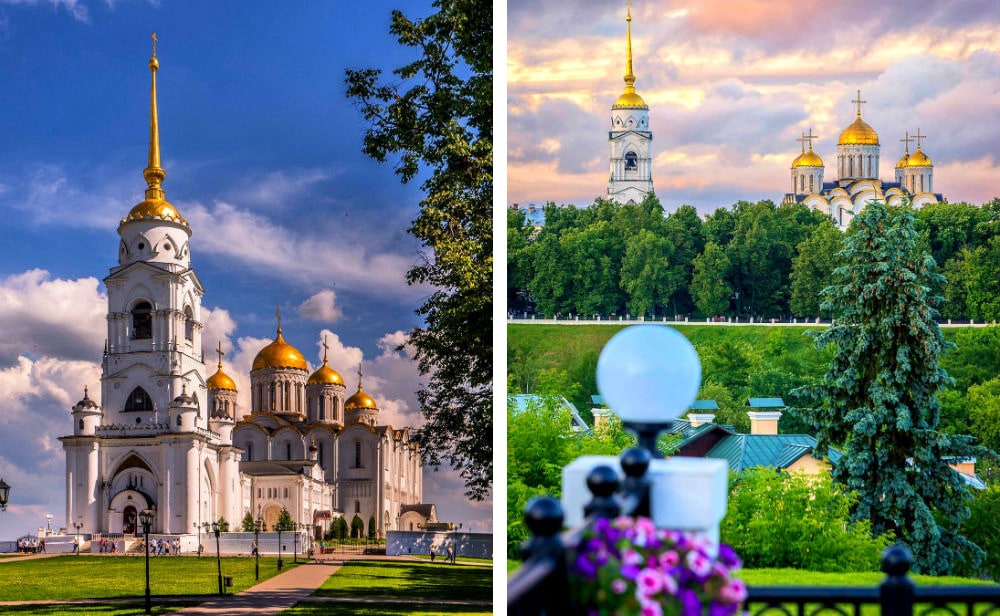 The most important monument of the white-stone architecture of pre-Mongol Rus is the Assumption Cathedral, built by Prince Andrei Bogolyubsky. In the past, it was here that the princes of Vladimir and Moscow were married to reign. The temple served as a model for the construction of a number of later religious buildings, including the Assumption Cathedral in the Moscow Kremlin.

The Cathedral is also valued for the original frescoes by Andrei Rublev that have survived in good quality. Just a few years ago, in the process of restoration, the masters uncovered new fragments of the preserved unique painting of the great icon painter. The paint layer of the frescoes has been reinforced, updated and presented to tourists for review.

Address: Bolshaya Moskovskaya street, 56
Working hours: the cathedral is jointly run by the Russian Orthodox Church and the Vladimir-Suzdal Museum of the Reserve. Depending on the time of day, you can buy a ticket for an excursion or go to the service.
VSMZ website: vladmuseum.ru 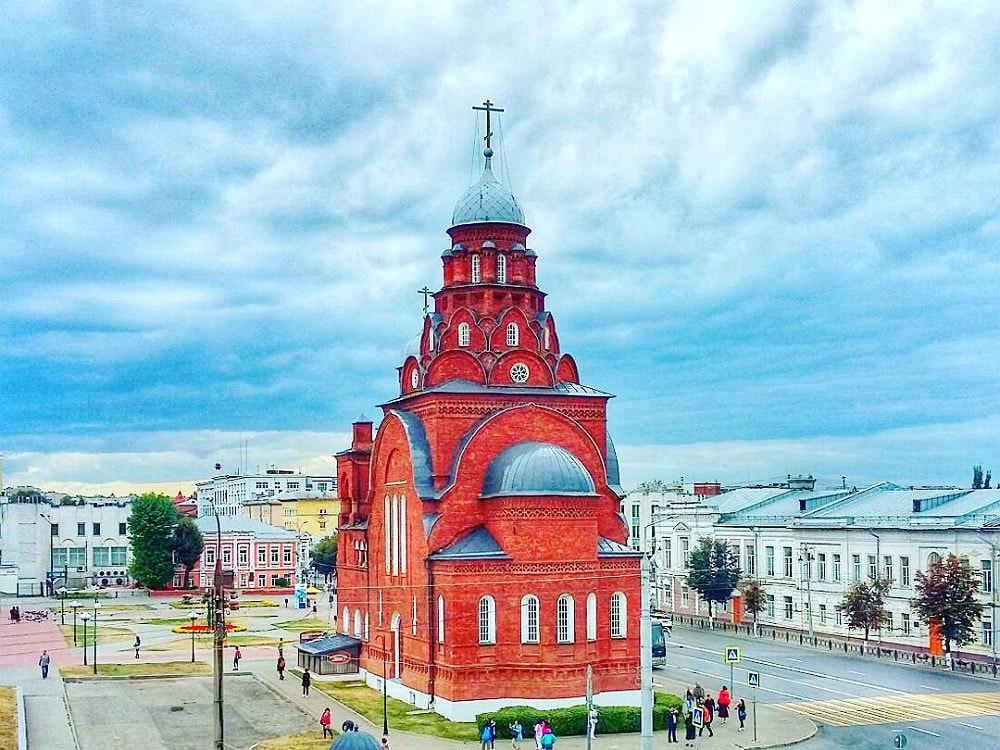 Bolshaya Moskovskaya is the central city street passing through the historical core of the city. Starting at the arch of the Golden Gate, it stretches through the entire center, gradually turning into Bolshaya Nizhegorodskaya Street. Both of these streets were once one, which was simply called Bolshoi or Main Vladimir street.

On both sides of Bolshaya Moskovskaya there are many cafes, bars and restaurants. Walking along this street, you can see all the main sights of Vladimir – including the high-walled Our Lady of the Rozhdestvensky Monastery and the building of the Chambers, where the main building of the Vladimir-Suzdal Museum-Reserve is currently located. There is also a red brick building of the former City Duma and a monument to the icon painter Andrei Rublev. It is from this street that you can get to most of the small private museums that densely fill the historical center of Vladimir.

Church of the Intercession on the Nerl 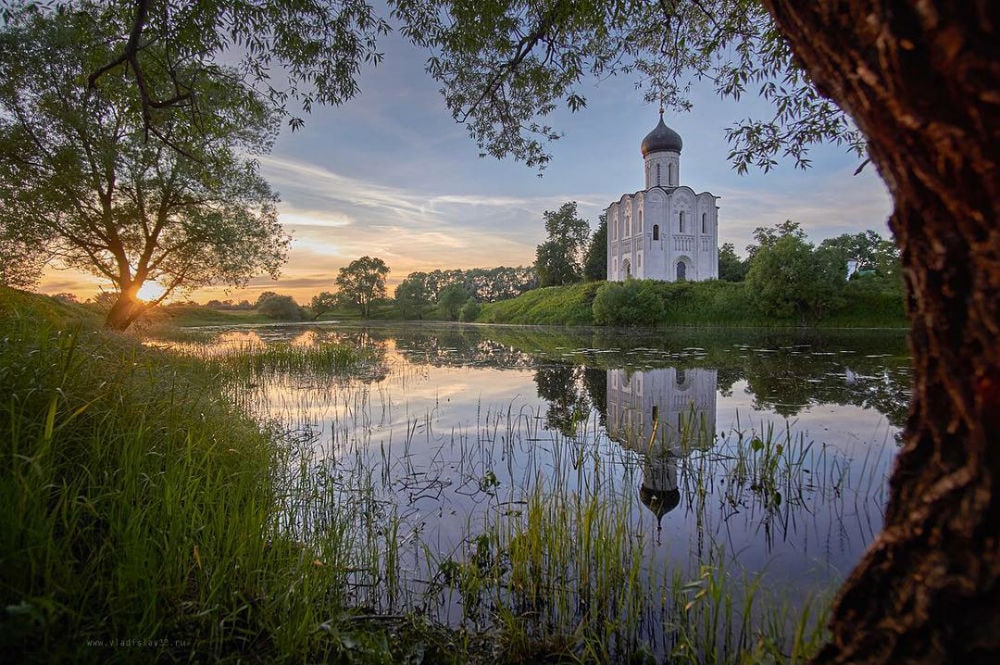 You definitely need to find a few hours and go to Bogolyubovo – a small village adjacent to Vladimir from Nizhny Novgorod. Here is the only temple in the world, standing on a water meadow. If you travel in early spring, you will see the church surrounded by water on all sides. And a boatman will definitely be nearby, ready to take you to the temple island – with a priest’s house and a small apiary.

The Church of the Intercession on the Nerl is a favorite filming location for photographers from nearby cities. And a trip to it – both on foot and by water – can become the most vivid memory of a trip to Vladimir. In the winter of 2017, illumination was organized near the temple. Now the church, shrouded in soft light, is clearly visible from afar. 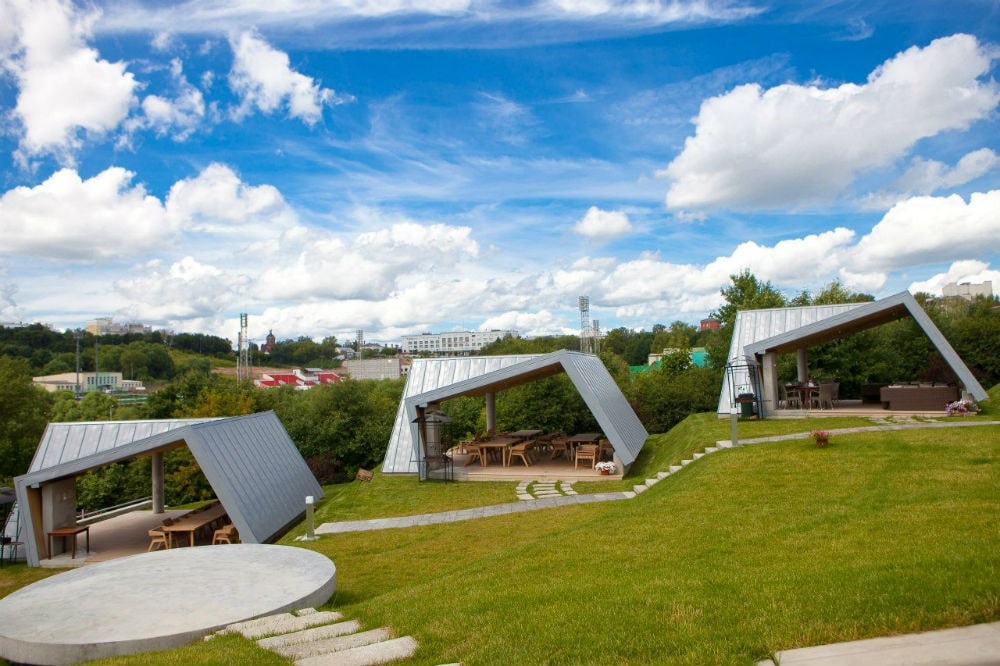 Park-hotel “Voznesenskaya Sloboda” – there are several restaurant sites for every taste. There are lush halls, cozy gazebos and a veranda overlooking the floodplains. The Park Hotel is located on a picturesque hill right behind the Church of the Ascension.

The spectacularly served lunch at Voznesenka will pleasantly surprise you. The award-winning team of chefs under the leadership of Chef Kirill Sinichkin time after time demonstrate real masterpieces of dishes prepared taking into account the national characteristics of Russian cuisine.

In the summer, restaurants use vegetables and herbs grown in their own greenhouses and on the beds laid out in the park-hotel. 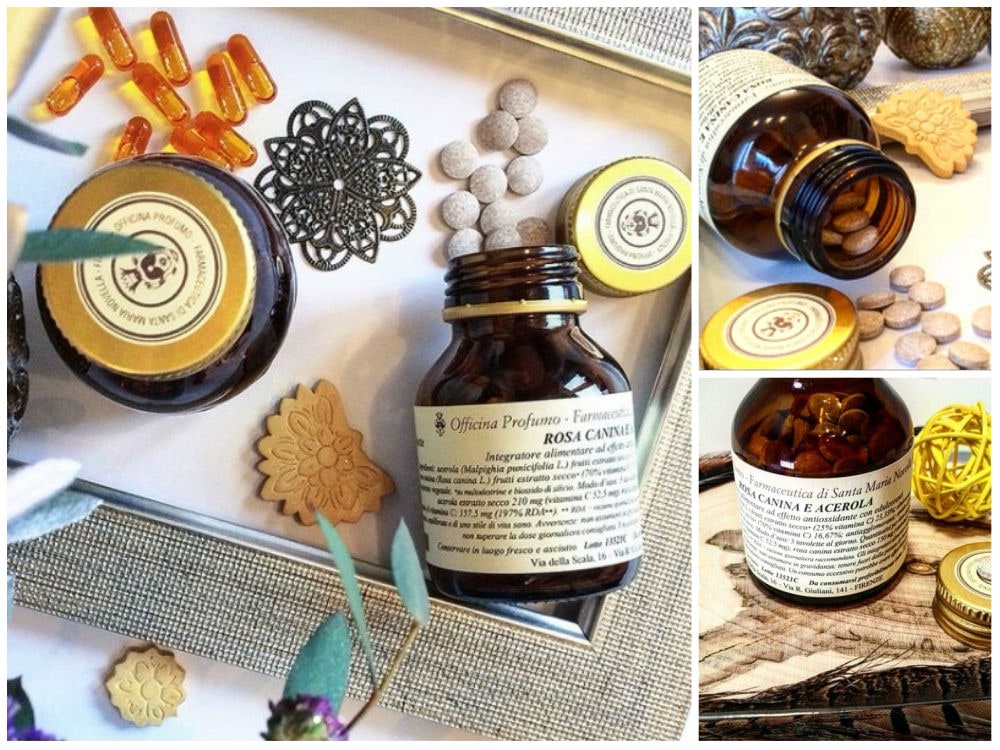 The Old Pharmacy Museum was opened in the summer of 2017. It is believed that the round building with a wooden outbuilding was built at the beginning of the 19th century at the direction of the governor Dmitry Dolgoruky – precisely for the organization of a pharmacy and the development of pharmaceuticals.

Now the museum presents interiors in the style of the 18th-19th centuries, vintage furniture and pharmaceutical utensils. The pharmaceutical collection itself is still small. However, it is daily replenished with items related to the history of the development of the pharmacy business. Here you can not only gaze at the old pharmaceutical bottles and beakers, but also stay for an interesting lecture, for example, on the ancient methods of opium treatment.
A monument to the pharmacist is erected at the entrance to the museum.

Observation deck at the monument to Prince Vladimir 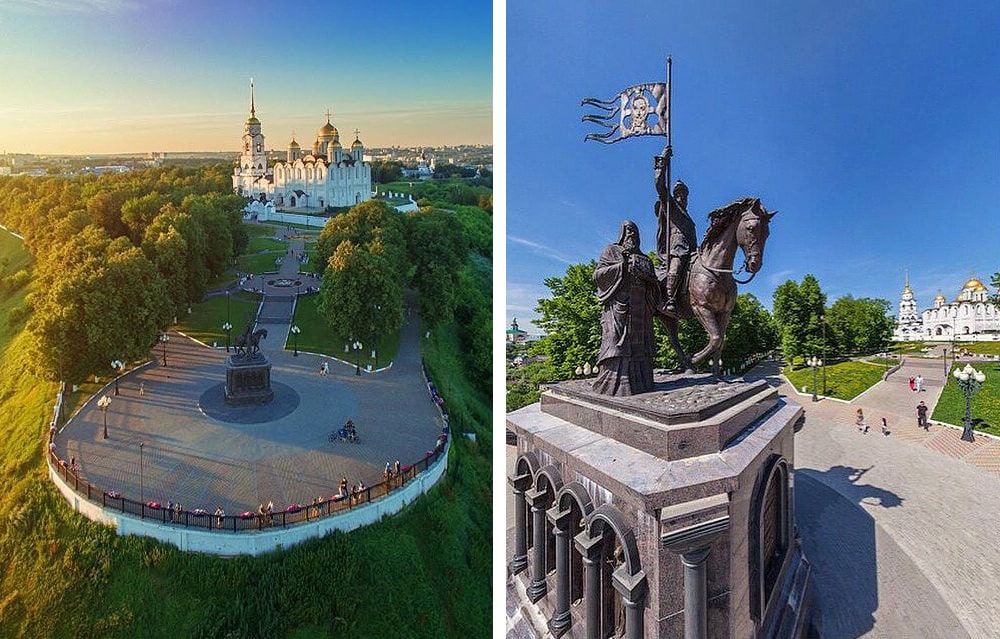 Vladimir is a city that stands on nine hills, the chain of which is the top of a narrow mountain range. On the central of them – Annual Mountain – a park named after A.S. Pushkin.

This is one of the most favorite places for walks of the townspeople, ending with a high and spacious observation deck, which offers a stunning view of the Klyazma (there is no embankment in the city, so it is worth looking at the river from here), floodplain floodplain meadows and the opposite hill with green cascade of the Patriarch’s Garden.

The observation deck is crowned with a monument to the baptists of the Vladimir land – the Equal-to-the-Apostles Prince Vladimir the Red Sun and St. Theodore. A massive 14-meter sculpture, standing on a hill overlooking the river, can be seen far away at the entrances to the city.

Where is it: in the park named after A.S. Pushkin at 56 Bolshaya Moskovskaya Street 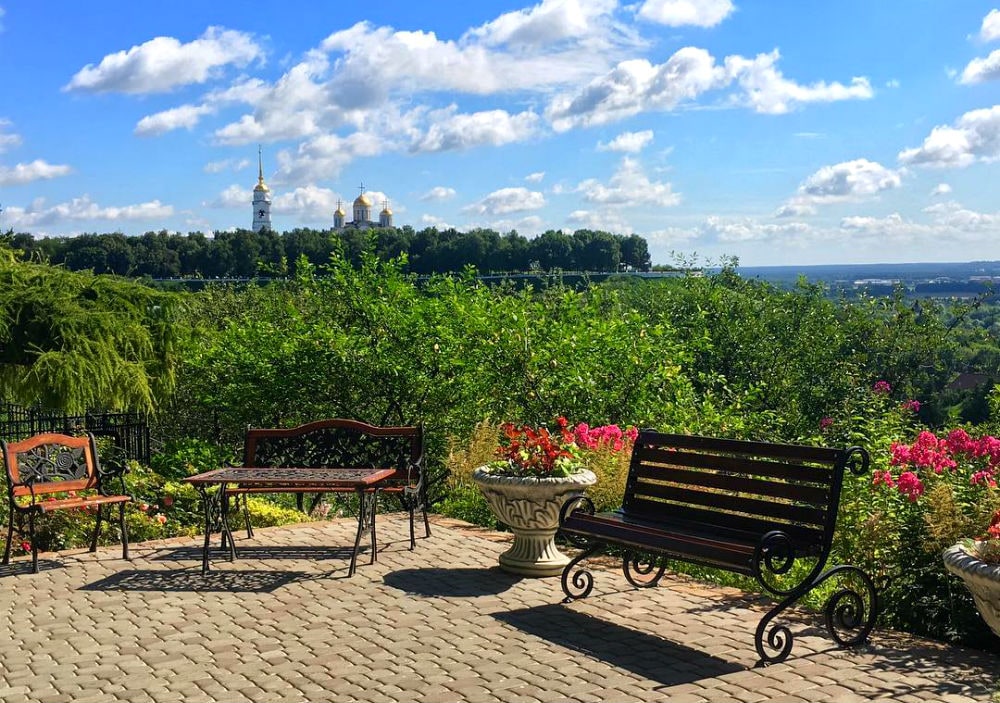 There is no more romantic place in Vladimir. It is especially beautiful here in spring, when hundreds of flowers, shrubs and trees bloom at the same time. A green amphitheater, filled with fountains, ornate staircases and view terraces, lush flower beds and cozy gazebos, is not overlooked by any couple of newlyweds.

The garden was originally a cherry tree. The trees brought from Georgia took root well on the Vladimir land and became a good source of income for local residents – the local berries were brought to Moscow for sale and even served at the tsar’s table. Later, during the Second World War, the cherry orchards were almost completely lost. And now enthusiasts and city leaders are making great efforts to revive the plantings of this symbolic tree on the Vladimir land.
In the summer, you can buy berries and fruits grown here in the garden.